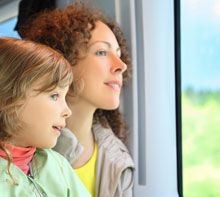 Parents of teenagers know it’s never an easy feat to wake up before 8 a.m. while on vacation. Now imagine getting them to board the Kamloops to the Lake Louise portion of the Rocky Mountaineer trip at 6:30 a.m. Of course they complain, but once you’re sitting in the Glacier Dome seats of the train, staring up at the mountain vistas through the glass ceiling, they seem content, and even more so when a hot breakfast arrives and the train is quickly socked into a mesmerizing valley of towering peaks.

The finest train rides for families do, indeed, slow down so you can snap that perfect photograph of a waterfall. They’re in no rush to get you to the next destination because the journey is the most important part. Family-friendly train rides offer meals in a dining compartment, movies to watch, naturalists and train historians, and many a splendid view. They’re a great way to be immersed in majestic scenery while cherishing time with the family. 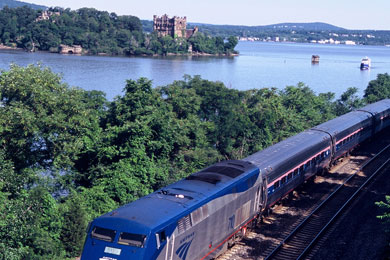 1. Ethan Allen Express, New York to Rutland, Vermont
The Ethan Allen Express leaves from New York Penn Station and follows the Hudson River, making stops in upstate New York and southern Vermont, arriving in Rutland close to six hours later. A favorite stop for families is Saratoga, home to a Revolutionary War battlefield, the Saratoga Performing Arts Center, and the Saratoga Race Track. And in Fort Edwards, you can take a short bus ride to Lake George Village, the honky-tonk town that sits on the southern edge of this 30-mile-long lake in the Adirondacks. On arriving in Rutland, a biking outfitter called Country Inns Along the Trail will meet you with bikes for the start of a self-guided inn-to-inn biking trip. Depending on your family’s ability, the outfitter provides detailed maps, emergency roadside assistance, lodging, dinner, breakfast, and transport of your luggage from one inn to the next. In the winter, a shuttle from Rutland brings skiers to nearby Killington Ski Area. 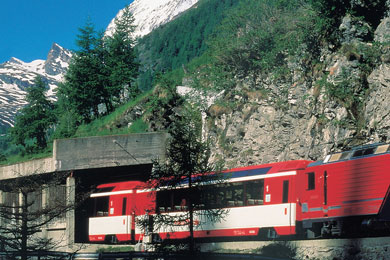 2. Glacier and Chocolate Trains, Switzerland
Stunning mountain scenery coupled with stops at villages known for their homemade chocolate and cheese — and buoyed by one of the finest train networks in the world (after all, the Swiss are known for their punctuality) — is the reason why Switzerland is one of the premier train destinations. The 8-hour Glacier Express (one-way) connects the Alps resorts of Zermatt and St. Moritz. Only a 180-mile ride, the train has to slow down to go through 91 tunnels and across 291 bridges, all at an altitude over 6,500 feet. The close to 10-hour Chocolate Trail (round-trip) brings you from the jazz festival town of Montreux to Broc. Along the way, you’ll stop at the cheese town of Gruyeres and take a short bus ride to the Cailler-Nestle chocolate factory, nestled between lakes and towering peaks. 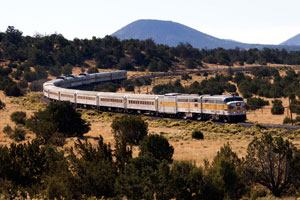 3. Grand Canyon Railway
Return to the Wild West on this 8-hour round-trip train ride from Williams, Ariz. to the Grand Canyon. The Cataract Creek Gang keeps kids entertained with music and staged train robberies aboard a train ride that first originated in 1901. Thankfully, the train has been updated with an observation dome and main dining car. You’ll want to be near one of the windows to see the 12,000-foot San Francisco Peaks. Once you reach the South Rim of the Grand Canyon, you have four hours to play before the return trip. You can also choose to spend a night or two at the Canyon before heading back. 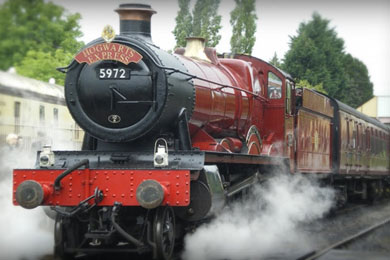 4. Harry Potter Train, Scotland
The 84-mile train ride from Fort William to Mallaig in the Scottish Highlands is only two hours long, yet staring at the majestic scenery in awe, you’ll wish it would never end. In fact, the terrain is so breathtaking that the Hogwarts Express seen in many Harry Potter films took the same route. You’ll be aboard The Jacobite, a steam train that leads you past Scotland’s highest mountain and deepest loch before arriving at the country’s most westerly train station. Once you arrive in Mallaig, you can walk around this fishing port known for its herring catch, before taking the return jaunt. Or, continue your travels by ferry to the Isle of Skye, to visit the 13th-Century Dunvegan Castle. Just be on the lookout for Potter’s arch-nemesis, Voldemort.

5. London to Euro Disney, France
Many families traveling to Europe connect from London to Paris on the speedy Eurostar Train through the Chunnel. Yet, for younger children with a love for Disney, the better choice might be the 2.5-hour train from London to Euro Disney. The train departs from St. Pancras Station in London at 9 a.m. Kids can entertain themselves with a complimentary Disney-themed activity pack. When they arrive, Goofy, Mickey and Minnie are there to escort families off the train and walk them over to the park. The last train leaves Euro Disney at 7:30 p.m., but it might be wise to simply continue on the Eurostar to Paris, a mere 40-minute train ride away. 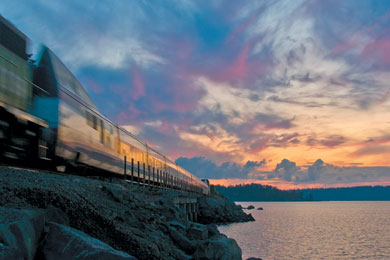 6. Northwest Passage, Eugene to Seattle
A 7-hour ride that’s a pleasure to take in the afternoon is the Amtrak Cascades train from Eugene, Oregon to Seattle, Washington. Starting at the University of Oregon campus, you’ll pass Mount St. Helens and go across the Columbia River Gorge before spotting the snowcapped peak of Mount Rainier in the distance. Almost halfway is the city of Portland, worthy of at least a one- to two-night stay before continuing onward. At the Cascades Bistro, try the clam chowder washed down with one of the local microbrews. Then sit back and relax in the wide seats of the cars, inspired by European train travel. 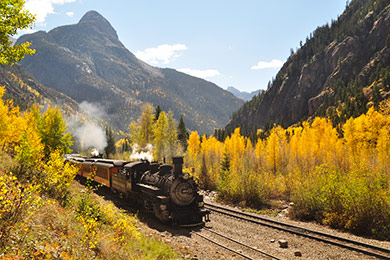 7. Durango & Silverton Narrow Gauge Railroad, Colorado
Hop aboard the Durango & Silverton Narrow Gauge Railroad and you’re immediately transported back to the Wild West, a time when miners, cowboys, and settlers would use these same tracks. The coal-fired, steam-powered locomotive snakes through the narrow canyons of the San Juan National Forest. In a mere 45 miles and a little over three hours, this remarkable train climbs more than 3,000 feet while families stare in awe at the 14,000-foot peaks that surround you. 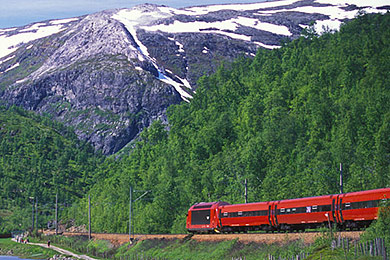 8. Norway in a Nutshell, Oslo to Bergen on the Bergen and Flam Railways
Norway’s most exciting day trip (12 hours one-way) takes you through the mountainous interior on a train, arriving at the coast for a cruise through the fjords. Start on the Bergen Railway from Oslo, before switching to the Flam Railway, which brings you to the breathtaking coastline. You’ll board a ship in Flam through the narrow Naeroyfjord, before returning to the Bergen Railway as it manages the steep hairpin bends of Stalheimskleiva. Eventually, you’ll arrive in Bergen, a picturesque UNESCO-heritage site of reconstructed medieval homes, warehouses and gables. The town was a hub of Scandinavian trade for more than 400 years, with German merchants buying dried fish and selling grain. 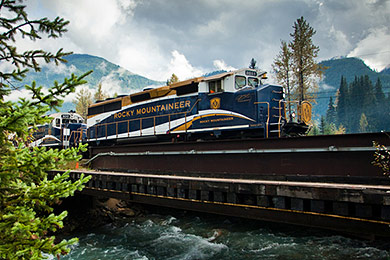 9. Rocky Mountaineer, Canadian Rockies Getaway
Board the Rocky Mountaineer and get ready for a soul-stirring train ride through the snowcapped peaks and cobalt blue glacial waters of the Canadian Rockies. One of the most scenic train trips in North America, the train leaves from Vancouver and heads across the Continental Divide before getting lost in the stunning mountain scenery. Trips last from one to seven nights, depending on the itinerary. On the Classic Journey Through the Clouds Vacation, you’ll spend two full days aboard the Rocky Mountaineer, with nights in Vancouver, Kamloops and Jasper National Park. This being the Canadian Rockies, be on the lookout for bear, elk, moose and bald eagles. All nights are spent at hotels, which are included in the price of the train trip. 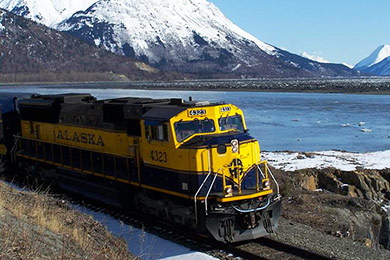 10. Alaska Railroad, Alaska National Parks by Rail
The Alaska Railroad is best combined with the popular Alaskan cruise along the Inside Passage. This way, you get to see Denali and Kenai Fjords National Parks, and North America’s tallest peak — the 20,320-foot high Mount McKinley. During the days on the six-day route, you’ll be traveling from Anchorage to Denali in comfort, seeing the park in its entirety. From Denali, you’ll travel back to Anchorage and on to Seward, with a chance to cruise among the glaciers and whales of Kenai Fjords National Park and raft amidst the icebergs of Spencer Glacier. All nights are spent at hotels like the Hotel Alyeska.