The LEGO Group created theme parks with one market in mind: children. And by children, it means those in the 2- to 12-year-old range, with rides, shows, restaurants and hotels specifically designed to entertain that age set.

This doesn’t necessarily mean you can’t bring your teen to LEGOLAND, though. In fact, with the recent addition of Star Wars Days at LEGOLAND Florida and other annual events at LEGOLAND, LEGOLAND is more teen-friendly than ever before.

Take a look at some of the highlights offered for each age group to determine the best ages for LEGOLAND. 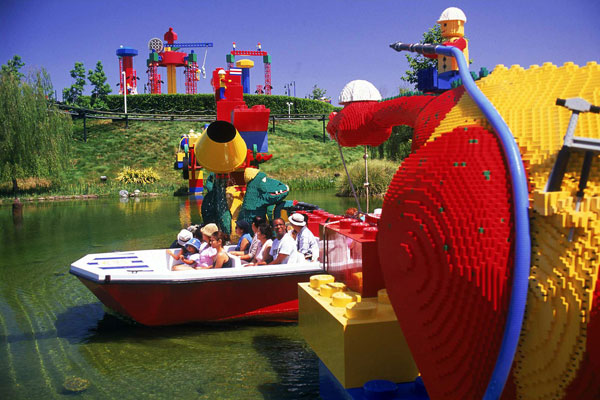 Toddlers
In 2014, LEGOLAND Florida introduced Duplo Village, where little ones can extinguish flames like a fireman, slide and climb all over the Duplo Farm, fly a plane or ride a train. There’s also an indoor play area and a water playground outside. LEGOLAND California has DUPLO Playtown, which is a similar interactive playground for youngsters.

FUN TOWN is especially fun for little ones, as well, as it offers a double-decker carousel.

Tweens
LEGOLAND Florida and LEGOLAND California both feature Heartlake City, based on LEGO Friends. Tweens enjoy “Friends to the Rescue,” an interactive show; Stephanie’s Newsroom, perfect for photos; Mia’s Riding Adventure, a circular-motion ride; and Heartlake Mall, where you can purchase products by LEGO.

The LEGO World of Chima at LEGOLAND Florida is also a highlight for tweens. Presented by Cartoon Network, it includes a water ride and movie experience in 4D.

Teens
Fun for all ages — teens included — is NINJAGO The Ride at LEGOLAND California. Introduced in 2016, it’s an interactive, 3D ride in which passengers sit in four-person cars to practice their ninja fighting skills before entering into a dual. In 2017, LEGOLAND Florida is expected to introduce the same ride in NINJAGO World, a new section of the park.

Something else your teens are sure to enjoy: the water parks! At both locations in California and Florida, LEGOLAND’s water parks offer waterslides, lazy rivers and wave pools, plus cabanas for rent. Water park admission is extra.

Related: How to Save On Southern California Theme Park Tickets

Hotels
Need a place to stay? Consider LEGOLAND California Hotel or LEGOLAND Florida Hotel, both of which offer themed rooms, buffets (including a mini-buffet for youngsters), pools and early entrance to the parks.