Character dining at Walt Disney World is a great way to see several of your favorite characters without waiting in a long line. And the interactions with kiddos are much, much longer and more unique than the typical hug-and-pose photo pass lines. But the extra attention and magic comes at a steep premium and sometimes, at the cost of food quality.

With more than 30 character dining experiences to choose from, plus the pressure of reserving months in advance (180 days if you’re staying on property!), choosing a character meal for your family can be overwhelming. Chances are, you’re only looking to book one during your trip and want to make it count. So, here’s the best of the best for breakfast, lunch or dinner based on theming, characters and, of course, food. 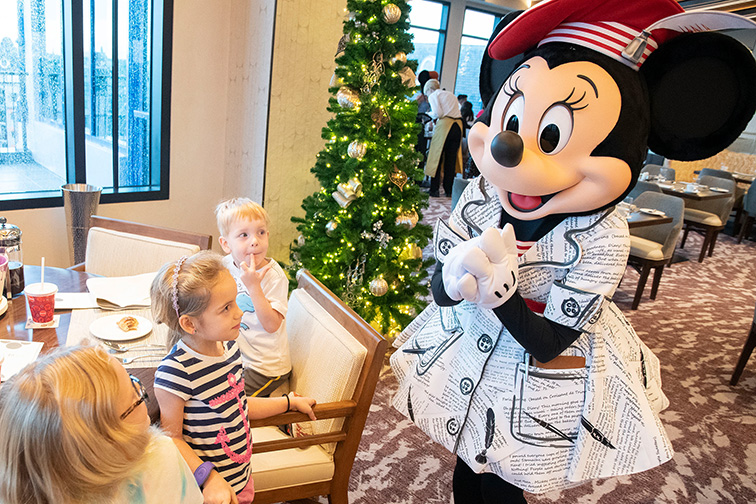 Disney’s Riviera Resort opened in December 2019 and is absolutely stunning. The theming is based off Walt and Lillian Disney’s travels along the famed French and Italian coast, and the resort is packed with gorgeous European art, Disney Easter eggs, and actual artifacts and photos of Walt and Lillian Disney. But like other deluxe properties, it’s not cheap. So, if you can’t splurge on a room here, at least splurge on the character breakfast at the property’s rooftop restaurant.

Breakfast à la Art with Mickey & Friends at Topolino’s Terrace (Topolino is Mickey Mouse in Italian!) is a prix fixe breakfast experience and everything is a play on art, from flatware shaped like a paintbrush to artisan bread sculpted into a wheat stalk. And for a family-friendly breakfast, it’s incredibly sophisticated with gruyère quiche and elderflower mimosas. But the best part––and the real draw––is the adorable character costumes. You get to see the “big four,” who have adorable outfits that reflect their artistic profession: Mickey is a painter. Minnie is a writer. Daisy is a ballerina. And Donald is a sculptor. It’s incredibly precious and you’ll want to plan ahead and wear matching family berets or neck scarves for photos. 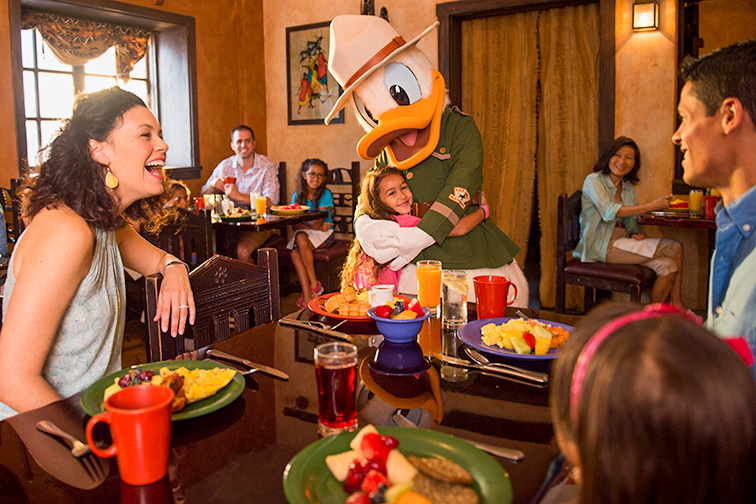 Adventurers Outpost is the signature spot for meeting Mickey inside Disney’s Animal Kingdom, but if you don’t snag a FastPass+, that line can be daunting. However, it’s not the only way to see the mouse in adorable safari garb. Over at the Tusker House Restaurant, you can catch Donald, Daisy, Goofy and Mickey, all day no matter the meal. The food here is some of the best, as it’s something different from ho-hum American fare. Inspired by a vibrant Harambe marketplace, the buffet menu includes roasted meats, curries and a seriously tasty banana bread pudding.

Pro Tip: If you time your reservation at 10:30 a.m. or 10:45 a.m., you can hack an African-inspired brunch because you’ll catch that buffet right when they phase out the breakfast food and bring in lunch items. This is how you can create the perfect brunch plate with Nala and Simba waffles, fresh pita bread, tabouli and spicy hummus spreads. There’s also bottomless POG juice all day. 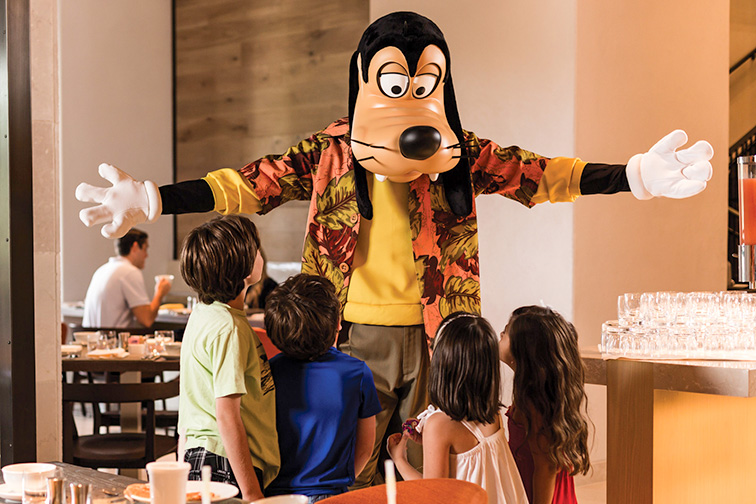 If you’re a park regular and you’re looking for something new and fresh, head over to the Four Seasons Resort Orlando at Walt Disney World for the best character breakfast you’ve never had. Technically, the resort sits on official Disney World resort property. While you can’t get to the resort via Disney transportation, it’s definitely worth a quick Lyft or Uber ride over. On Thursdays, Saturdays and select Tuesdays, breakfast at the resort’s Ravello restaurant turns into the Good Morning Breakfast with Goofy and His Pals. It’s super expensive at $48 per adult, but it’s by far the most sophisticated, gourmet character dining breakfast at Disney World in terms of healthy choices, robust offerings and customizable items, even for a buffet. Don’t miss the impressive juice bar.

And the characters? That’s the best part––especially for those into the #disneystyle scene. Goofy, Mickey and Minnie have specially-designed, retro-chic costumes exclusive to the Four Seasons. We’re obsessed with Minnie’s 70s tennis outfit. Her signature “bow” is actually a pair of blue vinyl sunglasses! 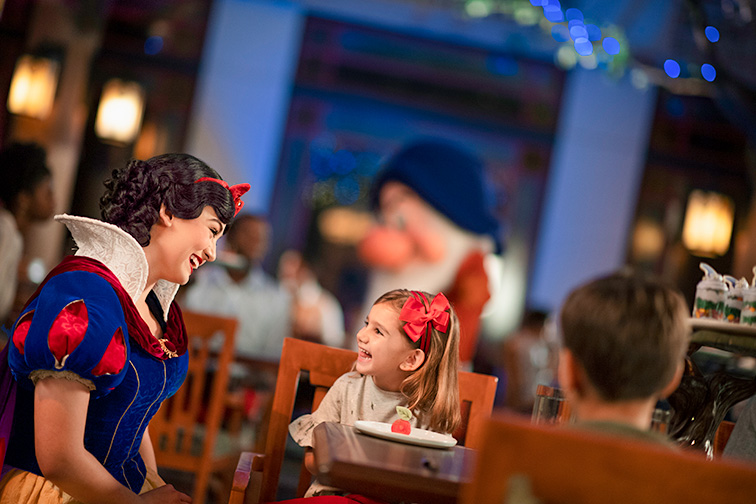 Disney’s Wilderness Lodge is a celebration of America’s national parks and a connection to nature. Disney revamped the restaurant in 2018 and turned the Craftsman-style restaurant into the Enchanted Forest––complete with glowing lights and tree-shaped serving platters––for Story Book Dining at Artist Point With Snow White. The menu is still sophisticated, but now it’s completely Snow White-themed, from “Hunter’s Terrine” to Bashful’s butter-poached fish. The dinner-only spot offers several potion-themed cocktails and mocktails, making the experience perfect for families of all ages.

For characters, you’ll see Snow White, Dopey, Grumpy and even The Evil Queen. Those last three are a real premium because while you can meet and greet Snow White in other places around the park, you can only meet with the queen and the dwarves at separately-ticketed seasonal events. But the best part of the experience is probably dessert, as the meal finishes with a sweets flight inspired by Disney’s first feature-length film, from shiny poison apples to “Miner’s Treasures” that feature chocolate gemstones. 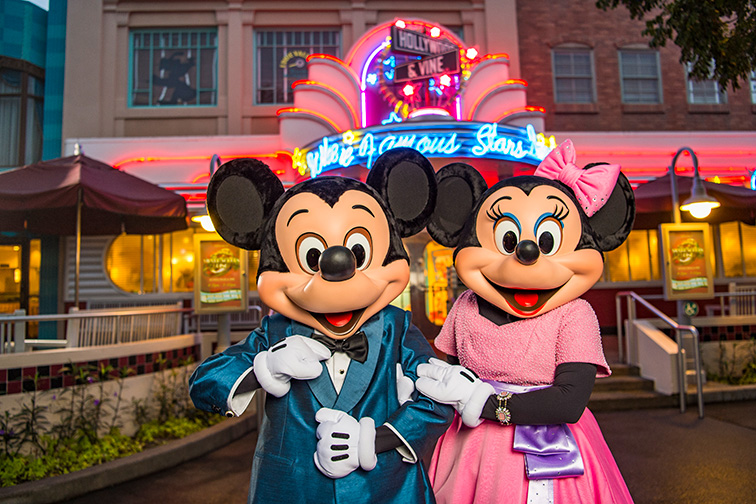 Located in Disney’s Hollywood Studios park, Hollywood & Vine is the place to go if you have preschoolers and toddlers, as this restaurant is the only spot at Disney World with a character dining experience featuring Disney Junior characters. And even if you have no idea who these folks are, your little ones will be elated to meet Vampirina, Sofia the First, Doc McStuffins, Jake the Never Land Pirate or other characters.

Disney Junior Play ‘n Dine is part character meal, part dance party; every 30 minutes or so, the characters will invite little ones to get up from the tables, groove out and get silly. This also grants parents some time to enjoy the food, which is pretty good for a buffet. The character experience is offered at breakfast and lunch, and lunch has some solid choices––from robust salad options to a build-your-own pasta bar. And there’s an ice cream sundae bar so definitely save room for that! 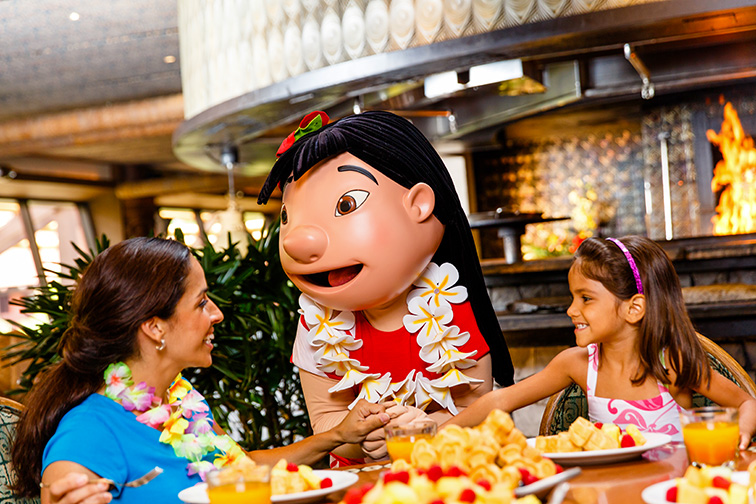 One of the OG resorts on the iconic monorail loop, Disney’s Polynesian Village Resort is worth a visit, even if you don’t book a room. You can score Dole Whips here without the long line in Adventureland. You can watch Magic Kingdom’s fireworks on the resort’s lawn without park admission. And at the Ohana restaurant, you can eat breakfast with Lilo and Stitch.

Unlike many character breakfasts, the Best Friends Breakfast featuring Lilo & Stitch is not a buffet. Instead, food is served family-style at the table in giant platters. This is a godsend if you’re juggling babies or toddlers and can’t get up and go back and forth to the buffet. Everything comes to you, including Hawaiian-style ham with pineapple compote, pineapple-coconut bread and, of course, the characters. As the name suggests, you’ll get to meet Lilo and Stitch, as well as some of their “friends,” typically Mickey and Pluto dressed in adorable luau garb. 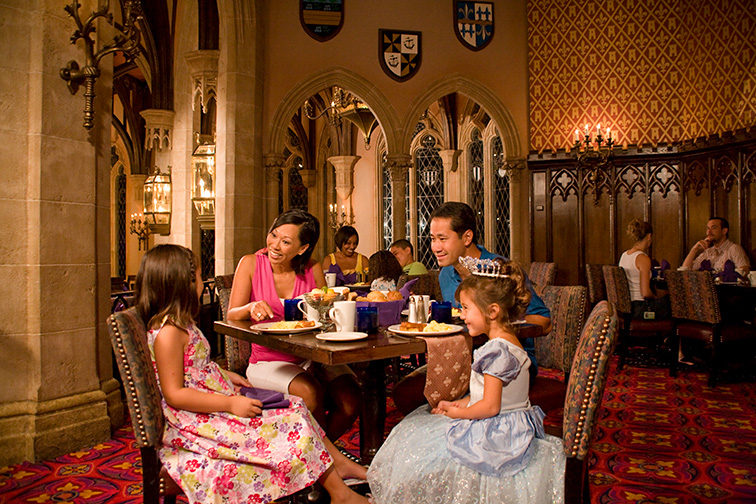 This is where character dining and Disney’s “signature” fine dining collide. Cinderella’s Royal Table is the most expensive character dining experience at Walt Disney World, as lunch or dinner will set you back $75 per adult. Breakfast is a whopping $62 per adult. But you’re paying for location, since the restaurant is literally inside Cinderella Castle. To get to the exclusive banquet hall, you either climb a fancy, spiral staircase (with incredible views of Fantasyland) or hop aboard a gilded elevator. It doesn’t get more magical than this.

While the restaurant is open for breakfast, lunch and dinner, we suggest lunch or dinner because the breakfast menu is just typical American/Southern fare. And if that $75 lunch seems insane, know this: Unlike other character meals, this one comes with souvenirs and a show! Guests will receive either a magic wand or sword of their choice (the host may automatically offer one or the other, but just know that you can pick whichever one you want), as well as a wishing star. These items are part of the meal’s show and are included with the meal price. And that fanfare includes several of the classic Disney princesses such as Ariel, Jasmine, Aurora, Snow White and Cinderella herself.

Pro Tip: Go to the restroom as soon as you’re seated at your table so you don’t miss any of the magic. 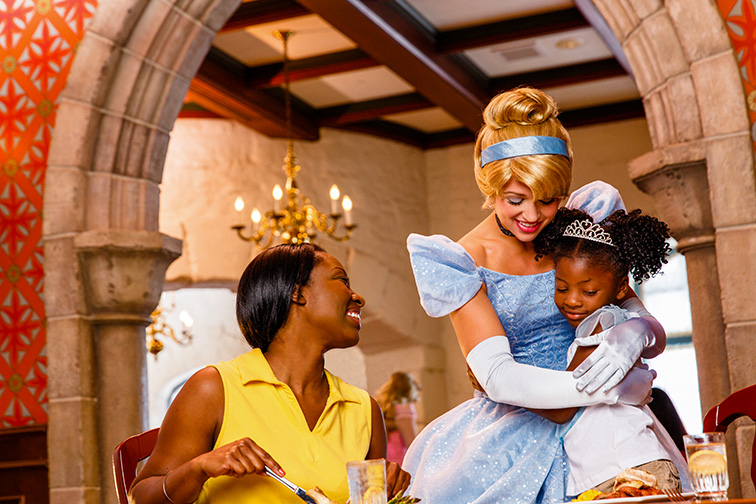 While Cinderella’s Royal Table is truly a bucket list Disney experience, we actually recommend Epcot’s princess character dining over Magic Kingdom’s because it doesn’t feel as rushed; we’ve also found the food to be slightly better. However, if you have picky eaters in your crew, you might want to stick with Cinderella’s Royal Table because at Akershus Royal Banquet Hall, located in World Showcase in the Norway pavilion, breakfast, lunch and dinner is all Norwegian fare––from kjøttkake to laks.

Aside from the menu, the top differences between the two princess experiences are that Akershus is slightly cheaper at $62 per adult for lunch and dinner, the banquet hall isn’t inside an impressive castle, and you don’t get souvenirs included with your meal. The characters are also slightly different. While the restaurant’s location and royal name might suggest that Frozen’s Anna and Elsa should host the affair, you won’t see these two here. Instead you’ll see the same princesses at Royal Table except Belle is swapped out for Jasmine.

Pro Tip: Typically, Epcot doesn’t open until 9 a.m. with most of World Showcase closed until 11 a.m., but you can gain access to World Showcase as early as 8 a.m. with a character breakfast reservation. It’s a great way to get some family photos “around the world” with the park seemingly all to yourself. 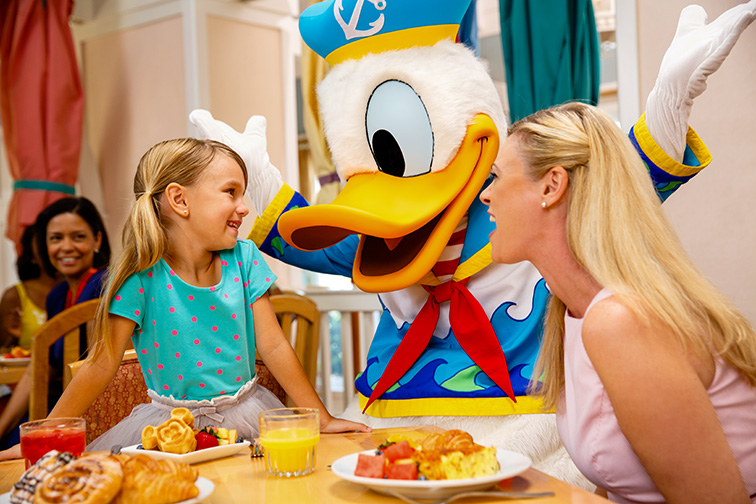 Disney’s Beach Club Resort is an often underrated Disney hotel, but it has several unique gems such as a sand-bottom pool, an old-fashioned soda shop and probably the cutest character breakfast at Disney World. At Cape May Cafe, you can book Minnie’s Beach Bash Breakfast for a sun-, sand- and surf-inspired meal with Minnie, Goofy, Donald and Daisy in adorable beachwear. Minnie actually got an upgraded outfit in 2019 and her new sunhat is seriously stylish. You’ll find traditional American breakfast items such as eggs, bacon, and Mickey waffles, as well as an impressive pastry bar for those with a sweet tooth. 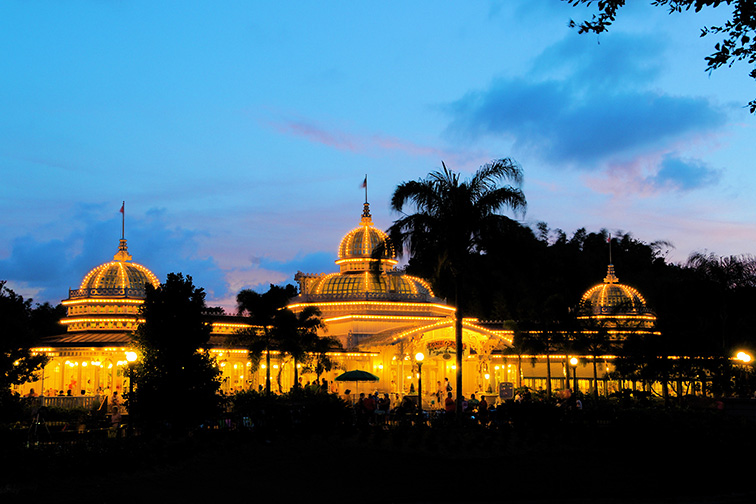 Located inside the Magic Kingdom at the end of Mainstreet U.S.A., The Crystal Palace isn’t exactly known for the best food. The breakfast is straight up cafeteria-style American fare and lunch and dinner have a definite Shoney’s vibe. But it’s really not about the food. The value here is rare characters. Definitely prioritize this one if your crew is a fan of the Hundred Acre Wood. The Crystal Palace is the only character dining spot where you’ll see Piglet and Eeyore, and one of only two restaurants to see Winnie the Pooh and Tigger. Honestly, posing with lovable-yet-gloomy Eeyore is the prime reason to go!

Deanne Revel is a travel journalist and host covering the world of theme parks and family entertainment. She loves all things roller coasters, character breakfasts and parades. Deanne is a packing pro (carry-on always!) and is passionate about LGBTQ travel. When not on assignment, you can find her exploring national parks or theme parks with her wife. Follow her adventures on Instagram @revelandroam. The 14 Best Gifts for Disney Fans