As author Henry James famously said, “There are few hours in life more agreeable than the hour dedicated to the ceremony known as afternoon tea.” In the harried American parenting world of juggling home, work, children, and after-school activities, an entire uninterrupted hour to sit and sip (not gulp) a beverage and nibble on tiny cakes and finger sandwiches with those you love is blissful. Here are five places where you can borrow a page from the royals and savor tea time with your family.

What better way to try afternoon tea than with a tour of the city that embraces it? Climb aboard a vintage double-decker, red Routemaster bus for tea and treats while you travel about Central London on B Bakery’s Afternoon Tea London Bus tour. The 90-minute venture takes you by notable sites including Big Ben, The Houses of Parliament, Westminster Abbey, Hyde Park and The Royal Albert Hall. Better still, in the month of May, B Bakery takes its already wonderful tea up a notch with a nod to all things royal thanks to a partnership with Debrett’s, the authority on modern British etiquette. As you nosh on a royal-wedding-themed menu inspired by Harry and Meghan, an expert guide fills you in on the history of royal weddings, what to expect on the royal wedding day, insights on Prince Harry’s youth, and tidbits on the British custom of tea. Traditional as well as vegetarian, vegan, Halal, and gluten-free menus are also available. Royal Tea Bus tours are offered twice per day in May, Thursdays through Sundays. 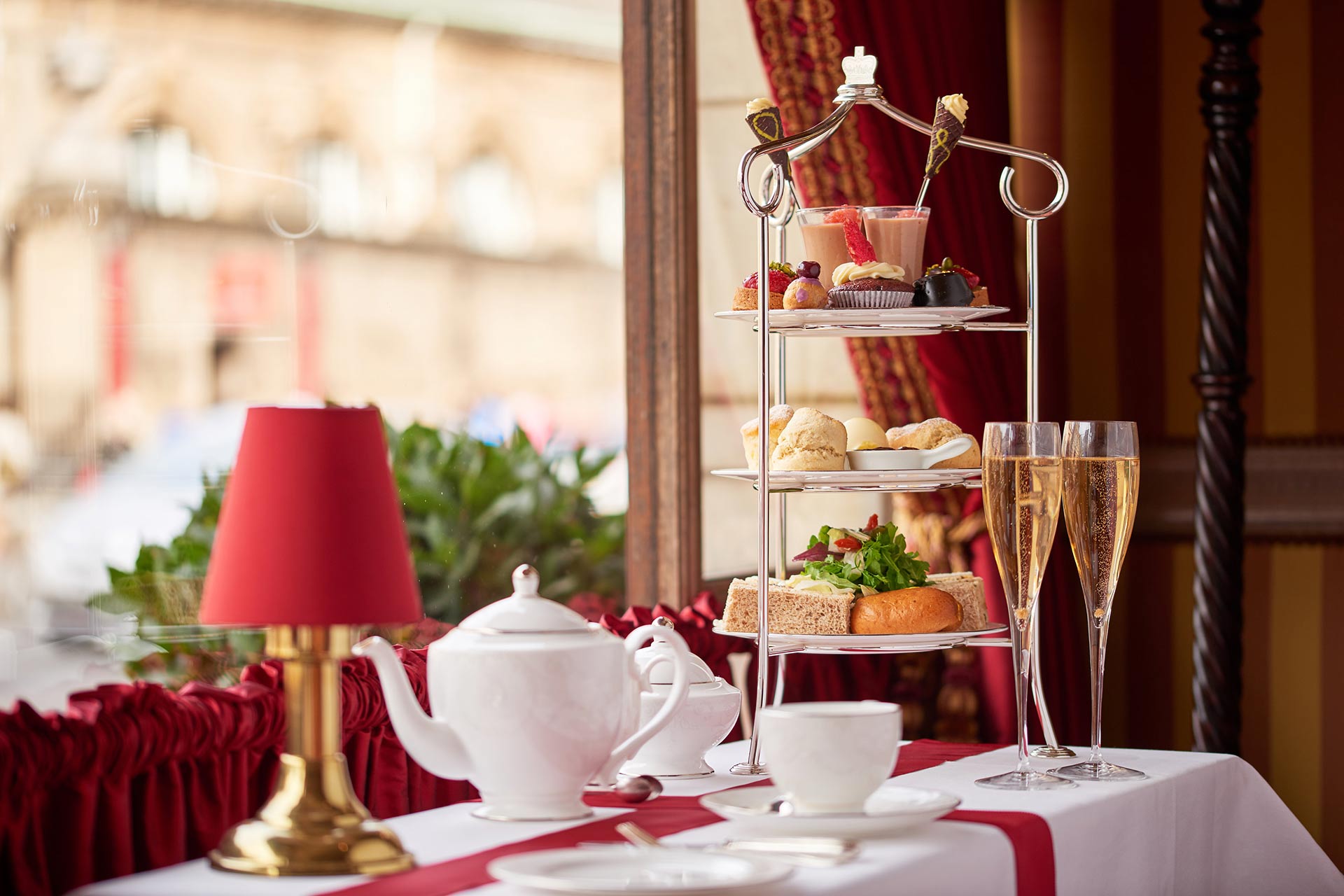 2. The Rubens at the Palace

For a more royal-like experience, The Rubens at the Palace‘s award-winning afternoon tea offers elegant service in a setting that’s perfectly welcoming for kids. Rubens’ Royal Afternoon Tea is served in the hotel’s Palace Lounge overlooking The Royal Mews, Buckingham Palace, a.k.a. home of the Queen’s horses and carriages, and therefore, the gate Her Majesty travels through when entering and exiting Buckingham Palace. Lounge seating, which includes window-facing love seats for two, is done in rich royal reds and gold, with pillows embroidered with a crown. Red ribbons cross white-clothed tables in honor of England’s flag.

This decadent experience includes a tiered display of sandwiches, from traditional egg and watercress, to a delicious “Coronation chicken” with toasted almonds. Fresh-baked warm scones that smell as heavenly as they taste follow, served with clotted cream and homemade strawberry jam. Last course is the cakes, which include a gin and tonic cheesecake and royal chocolate cake, all made by the in-house pastry chef.

A Prince and Princesses tea menu option (for kids under 12) has a peanut butter and jam, and ham and cheese sandwich in the mix, plus a choice of milkshake, hot chocolate, or tea. Kids staying at Rubens can opt for their own art of pastry making experience prior to tea and have their creations delivered during their family’s tea. Served Monday through Sunday, noon to 5 p.m. Tip: Book early, especially for Saturdays, and request a table near the window so you can watch for Royal Mews action. 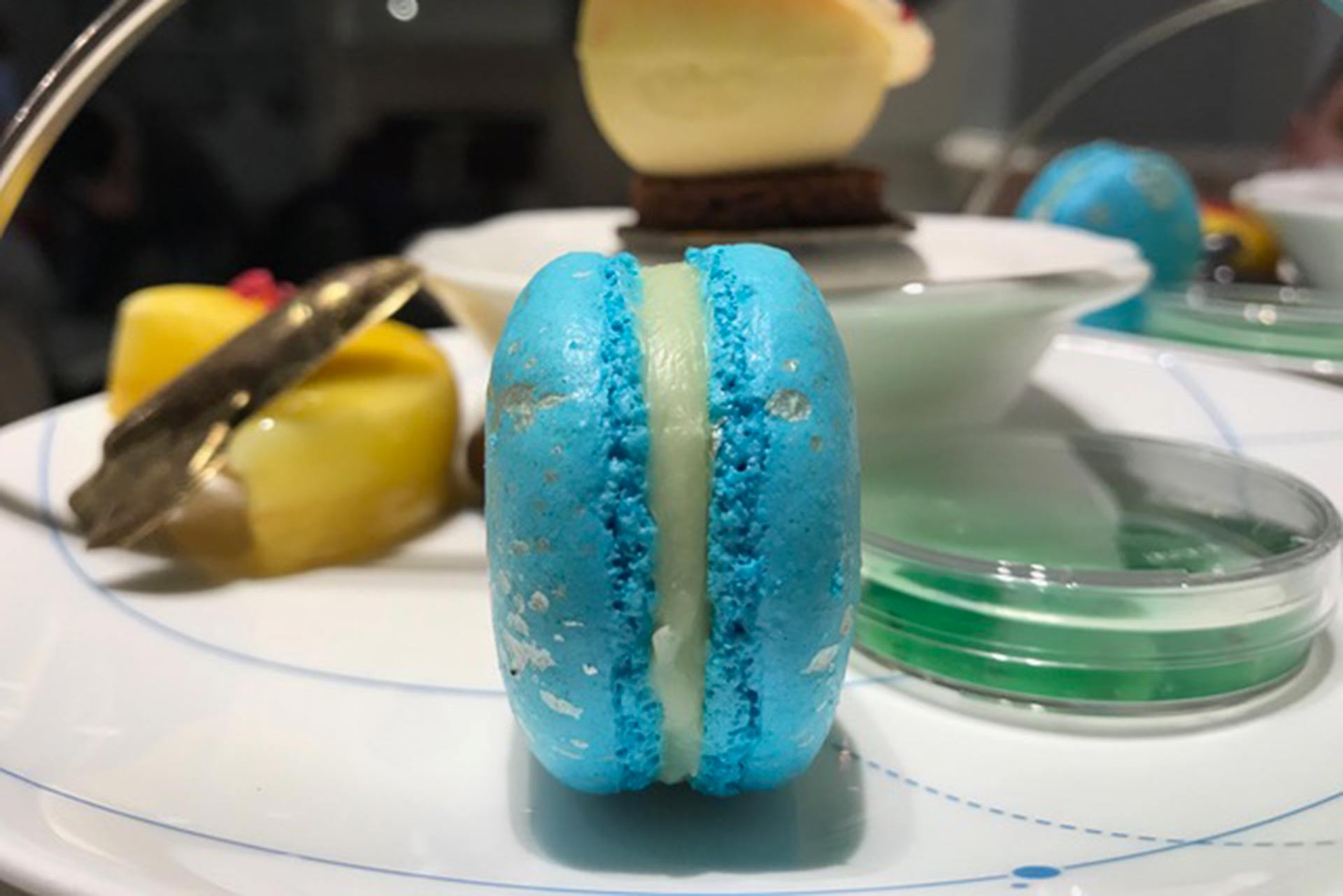 Where Ruben’s afternoon tea is decadent, The Ampersand Hotel‘s “Science Tea” is playful. This luxury boutique hotel, located in South Kensington (not far from Kensington Palace), takes its design cues from five concepts, many of which can be explored in notable museums nearby: botany, music, geometry, ornithology and astronomy. Afternoon tea is served in the hotel’s contemporary Drawing Rooms, where you’ll find deep sofas, studded armchairs in scarlet velvets and kingfisher blues, and cheeky art. A pot of tea is delivered along with a silver tray with beakers and other tools for experimentation: blue sugar, citric acid, an extra jar of Earl Grey tea, squirt tube of mango flavoring, and a large beaker for mixing. The three-tiered tower of treats includes delicious mini sandwiches on the bottom plate, a middle layer of scones, and a top tier of colorful, planetary-shaped cakes. Along with it comes a wooden box filled with chocolate “dust” that you sweep about to find two tasty “fossils.”

The Science Museum and Victoria & Albert Museum, the world’s largest museum of decorative arts and design, are a short walk from the hotel-good places to work up an appetite. The Science Tea is served from 2:30 to 6 p.m., Monday to Friday; weekends (and bank holidays) from 12:30 to 6 p.m. 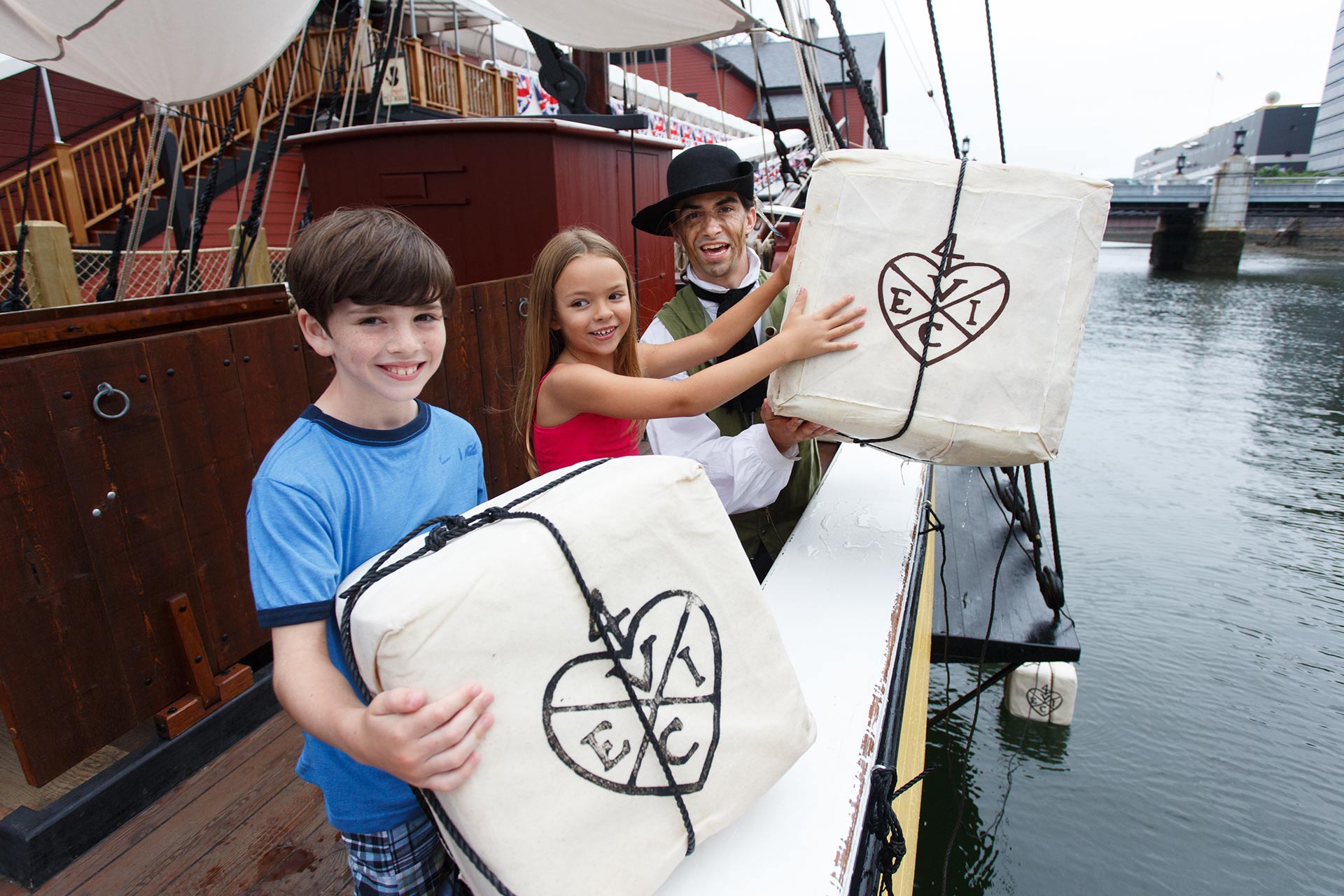 Given Boston’s storied past with tea-it did start a revolution-what better way to give tea a try than by pairing it with a side of history. Begin with a guided tour of the Boston Tea Party Ships and Museum that includes an interactive colonial town meeting, a chance to explore an 18th century merchant ship and ‘dump the tea,’ and a look at the Robinson Tea Chest, the only known surviving tea chest from the Boston Tea Party. After the tour, head to Abigail’s Tea Room and sample the five teas thrown overboard back in 1773, all served by ladies in colonial dress. Unlike most traditional afternoon teas that feature a set menu, Abigail’s offers individual soup and sandwich choices (many a bit more American than British), pies (including Boston Creme), cookies, and a Tea Platter that includes a pot of Abigail’s Blend and two scones with toppings. Museum tours begin at 10 a.m.; the last tour is 4 or 5 p.m., depending on the season. Abigail’s Tea Room is open 11 a.m. to 3 p.m. 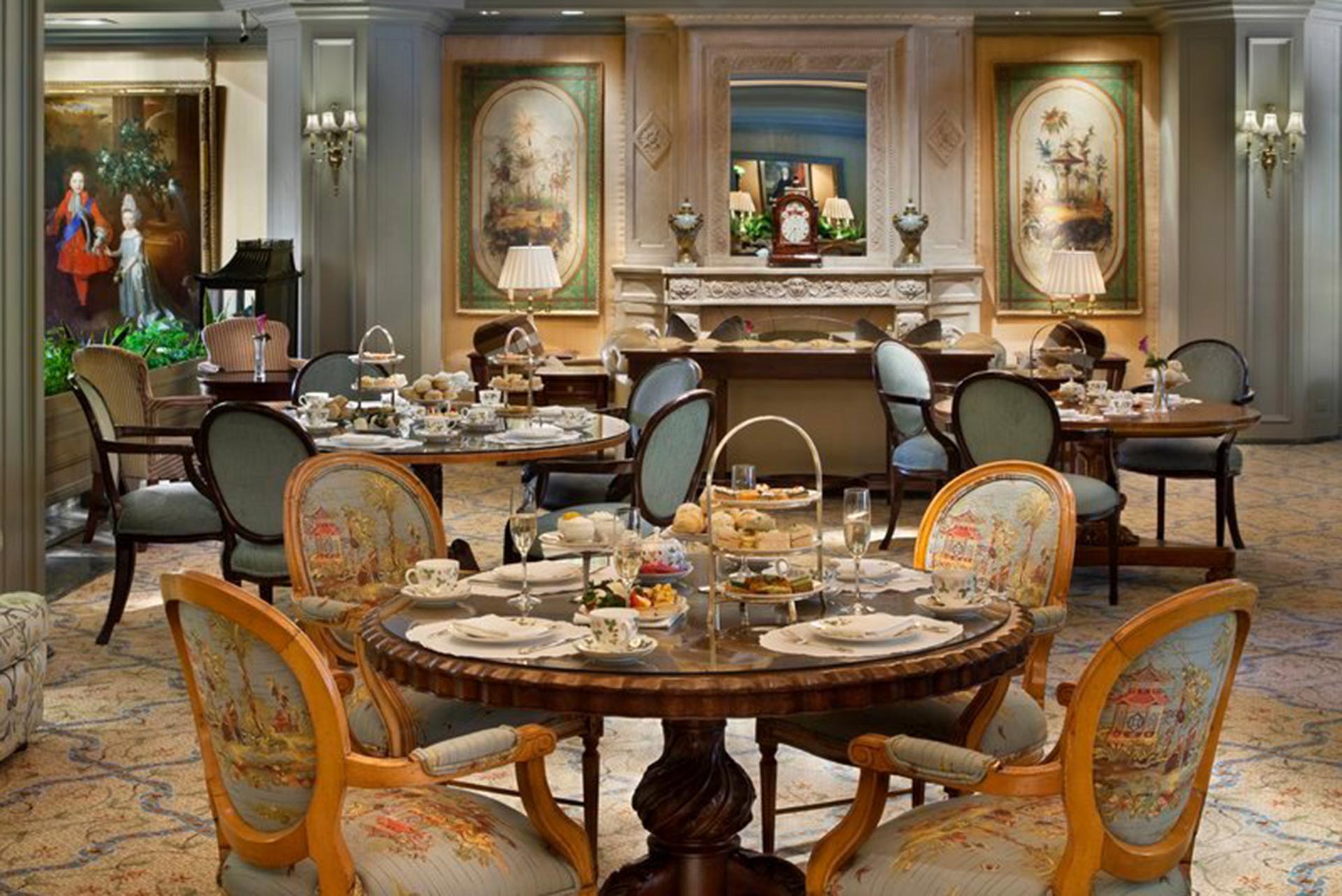 Windsor Court Hotel‘s afternoon teas have a decidedly British flare, offering a selection of 26 loose-leaf varieties, plus savory sandwiches that include truffle egg salad, served in an elegant parlor setting. Black currant and walnut scones with raspberry preserves and Devonshire cream and miniature tartlets are just a few of their notable items. Rachel Van Voorhees, principal harpist with the Louisiana Philharmonic Orchestra, plays regularly at Le Salon. A Royal Tea-a regal twist on the hotel’s traditional afternoon tea-will be offered during the Royal Wedding weekend. The special tea will feature life-size, cardboard cutouts of Meghan, Harry and the Queen, miniature Victoria and lemon-elderflower cakes (inspired by the wedding couple), and corgi-shaped cookies. Additional themed teas-inspired by wizardry, mad hatters, and princesses-are offered throughout the year.

Take a self-guided pre-or-post tea tour of the hotel’s award-winning art collection. The paintings, sculptures, tapestries, and furnishings are from the 17th to late 20th centuries and include Nicolas de Largilliere’s Portrait of the Prince of Wales and His Sister, a Thomas Thornycroft bronze sculpture of a young Queen Victoria on Horseback (located at the entrance to Le Salon), and a scale model of Windsor Castle, an original from the renovation of the castle in the 1820s. Afternoon tea is offered Fridays at 2 p.m.; Saturdays and Sundays at 11 a.m. and 2 p.m.