Orlando’s major theme parks — Disney World, Universal Studios Orlando, SeaWorld Orlando and LEGOLAND, Florida — have put the central Florida city on the map. But there’s more to see and do in Orlando and its surrounding towns than ride roller coasters. These smaller attractions and off-the-beaten-path sites offer quality entertainment and enrichment. Plus, they work within any travel budget. 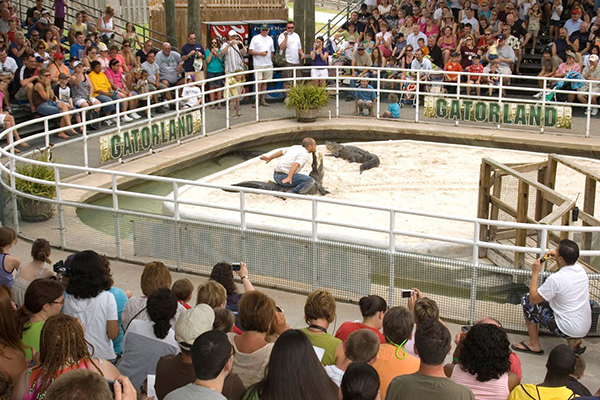 Gatorland – Orlando
What began as a small tourist attraction in 1949 has evolved into the “Alligator Capital of the World.” Gatorland offers a look at Florida tourism when gators were considered exotic enough to be the main attraction. However, it has progressed into a 110-acre theme park and wildlife preserve, showcasing thousands of alligators and crocodiles, an aviary, petting zoo and breeding marsh with an observation tower.

Besides observing the various animals in their habitats, kids can take a train ride or play at the Gator Gully Splash Park, while teens zip line above the various animals or try their best at the Rookie Wrestling experience (yes, they wrestle real alligators). Together, watch one of the popular shows as a family, like the Gator Jumparoo Show (get there early, as this one draws a crowd!) and then enjoy onsite dining at Pearl’s Restaurant, where you can sample gator in the form of fried nuggets (don’t worry, they don’t use their own alligators). 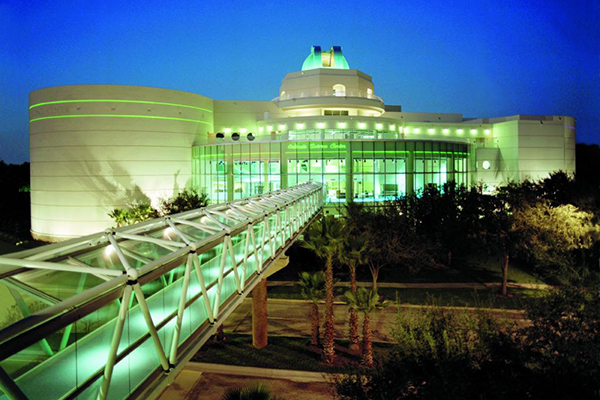 Orlando Science Center – Orlando
The Orlando Science Center introduces kids to physical and natural sciences in the most effective ways possible, with plenty of opportunities to experiment and interact with the exhibits. A life-size Tyrannosaurus Rex skeleton greets you near the entrance of the DinoDigs exhibit gallery. Guides in lab coats give walking presentations about this and several other reproduction skeletons of dinosaurs and prehistoric sea creatures. There are two fossil dig areas, which include a waist-high table and a pit on the floor, where kids can brush away dirt to reveal dino bones.

For preschoolers, the main attraction is KidsTown, where they can build dams at the water table, pick pretend oranges at the juice processing plant, create designs with working gears or participate in an impromptu drum lesson. And for the grade school-aged set, the Science Park gallery exhibits focus on principles such as magnetism, electricity, lasers, sound waves and more. They can construct pinewood derby cars and send them down the 70-foot track, play a harp with laser strings, or create echoes with tubs of PVC pipe. The Digistar planetarium, inside the 310-seat CineDome, features a giant, 8,000-square-foot screen. You can watch a traditional planetarium show, laser light shows and movies in this supersized theater. 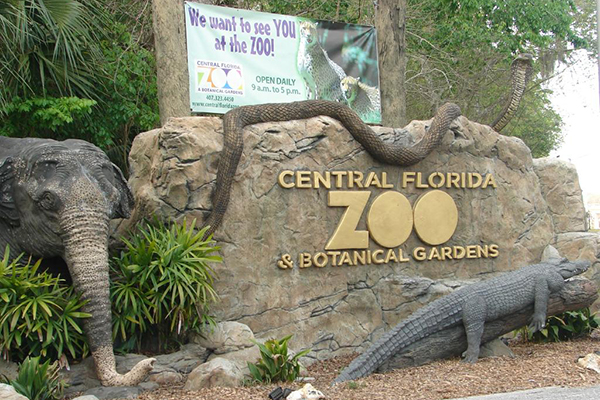 Central Florida Zoo and Botanical Gardens – Sanford, Fla.
With more than 400 animals, the Central Florida Zoo and Botanical Gardens in Sanford, Florida, (about 35 minutes from Orlando) offers a full day of entertainment for families. In addition to the menagerie of mammals, reptiles and amphibians in residence, there’s also the Barnyard Buddies Children’s Zoo and an impressive collection of bugs in the Massey Services Insect Zoo. The Herpetarium houses the Southeast’s largest collection of venomous snakes and non-venomous reptiles. Zookeepers offer several programs a day, such as bird shows, reptile demonstrations, feeding observations and encounter programs with raptors, camels, primates and felines.

The Zoo offers rides and attractions in addition to the nature and animal exhibits, including a train, carousel, playground and laser tag area. The Wharton-Smith Tropical Splash Ground is a water play area offering cool relief on warm days, with raining trees, a water tunnel and a dump bucket. Another fun attraction is the Zoom Air Adventure Park, where teens can climb on rope bridges, zip lines and suspended disks. 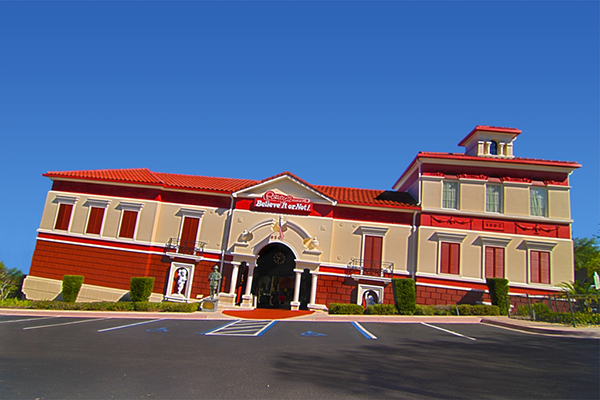 Ripley’s Believe It or Not! – Orlando
Located on Orlando’s International Drive, Ripley’s Believe It or Not! is bizarre, but family-friendly to say the least. The museum looks like it is sinking into the ground, but it’s just an illusion representing the quirky character of this collection of oddities from around the world. Artifacts and interactive exhibits are displayed in 16 different galleries, which you tour at your own speed. The relics range from the disturbing, like the human shrunken head, to the oversized, like the 25-foot mural of Jimi Hendrix made from more than 8,500 playing cards. 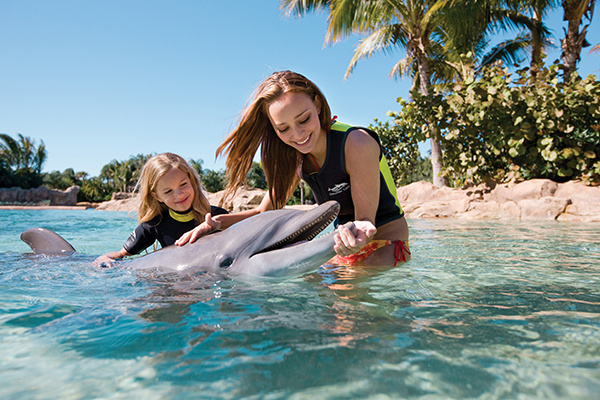 Discovery Cove – Orlando
Discovery Cove may be located in Orlando, but families will feel like they’ve been transported to an island oasis filled with marine animal encounters and underwater adventures. An entire day is needed to soak up all the fun that is offered here. Experiences and activities include Dolphin Lagoon, where kids ages 6 and older can swim with dolphins; Explorer’s Aviary, with a variety of exotic birds landing on arms and heads begging to be fed; Freshwater Oasis, an underwater experience that brings guests face to face with otters; Serenity Bay, an 80-degree pool and water playground; the Grand Reef, where kids can swim with stingrays and colorful fish; and Wind-Away River, for guests who want to float along and take in the various wildlife around them. Aditionally, entry to SeaWorld Orlando and Aquatica are included in your Discovery Cove admission. 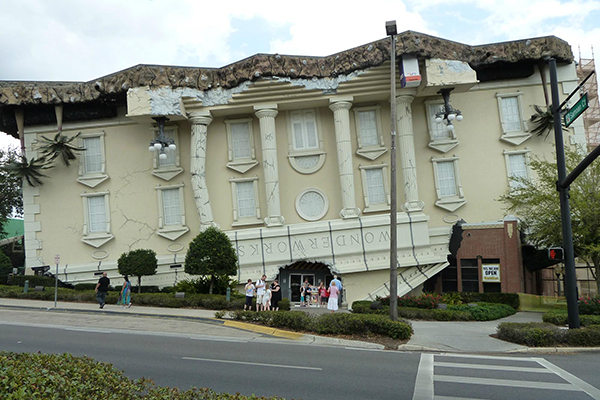 WonderWorks – Orlando
Also located on Orlando’s International Drive, WonderWorks is an attraction built to exercise your mind through education and entertainment. With more than 100 hands-on exhibits, families can experience the application of force, lie on a bed of 3,500 nails and feel a 5.3-magnitude earthquake in the Disaster Zone. Other kid-friendly experimentation awaits on the life size replica of the Mercury capsule, the Bubble Lab, the Mind Ball bio feedback game and the Far Out Illusion Gallery. 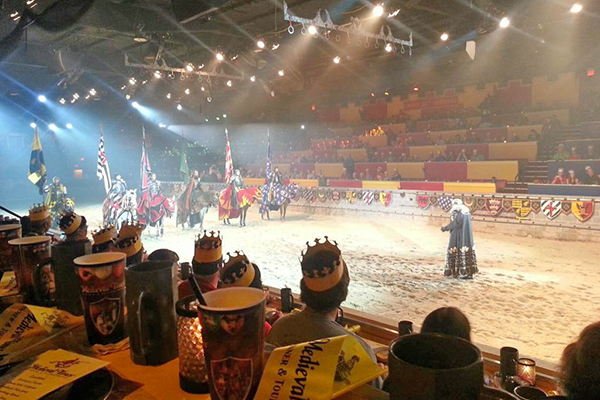 Medieval Times – Kissimmee
Medieval Times offers a family-friendly evening out in a themed surrounding that carries through to the live, interactive show, which you watch from your table while you dine. The dinner attraction in Kissimmee, Florida, is inspired by an 11th-century feast and tournament. The action takes place in a castle — one of the nine located throughout the U.S. and Canada — which is surrounded by a moat and drawbridge. Guests are served a four-course banquet in the arena while cheering for one of six knights competing in the joust and other tests of skill. Expect almost two hours of jousting, swordsmanship, hand-to-hand combat, horsemanship and falconry, set to a story of the King Don Carlos and Princess Catalina. 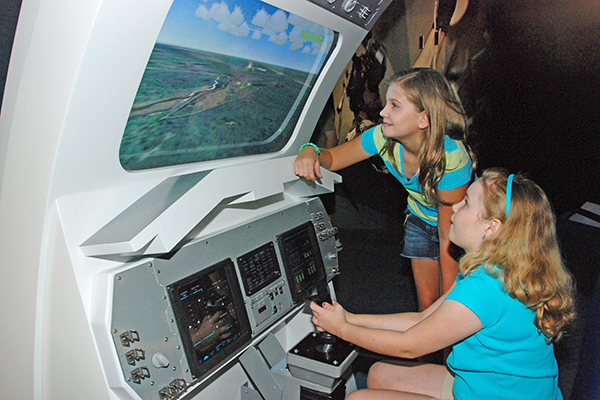 The KSC Bus Tour, included with admission, explores the history of the Apollo moon and space shuttle programs with panoramic views of the launch pads. It stops at the LC-39 Observation Gantry and the Apollo/Saturn V Center, where visitors see a fully restored, 363-foot Saturn V moon rocket and relive the historic Apollo missions which resulted in man landing on the moon. Visitors can also stay at the various areas as long as they would like, rather than feeling the need to rush back before the bus departs. The KSC Bus Tour runs every 15 minutes.

Immersive programs are also available, including the Shuttle Launch Experience and the Astronaut Training Experience, both of which provide a realistic taste of space travel. Reservations are needed for these experiences. 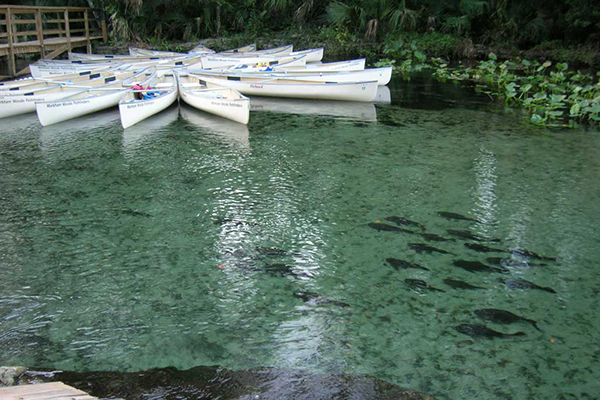 Wekiwa Springs State Park – Apopka, Fla.
For a relaxing escape from the bustle of the Orlando theme parks, head to Apopka, Florida, about 30 minutes from Orlando, where you’ll find the Wekiwa Springs State Park. The park borders the Wekiwa River and offers families a plethora of outdoor activities, from hiking, biking and picnicking, to water sports and swimming. There are 13 miles of trails to explore and 60 spacious campsites for families who want to spend the night. Canoeing and kayaking are popular at the park and rentals are available. Swimming and snorkeling can also be enjoyed in the clear spring water, which is 72 degrees year-round.

After working up a sweat with all of the outdoor fun, grab a snack and a cold drink at the concession stands, which are open from 9 a.m. to 5 p.m. daily. Additionally, there is a picnic area for families who bring their own food and drinks. Picnic tables and grills are available, and a playground, volleyball court and horseshoe pit are located nearby for kids to enjoy while parents cook up some grub. An entire day can easily be spent at the park, so get there early — it fills up quickly with locals who know its worth.