If you’re thinking of showing the kids the world, a cruise is an excellent option, as you can see multiple destinations and stay in one location as a home base. River cruises in Europe are growing in popularity for families, with one of the most popular taken along the Rhine River. This cruise passes quaint villages and castles for vacations right out of a children’s fairytale. Here’s what to expect when cruising along the Rhine. 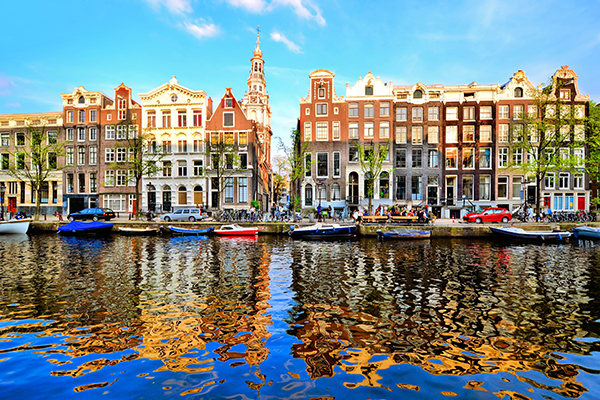 Amsterdam
Often, a Rhine cruise can begin or end in the capital of The Netherlands, Amsterdam, a picturesque canal city, with its old town easy to circumnavigate with children. Although you’ll be traveling on a river cruise, enjoying one of Amsterdam’s boat cruises is a great introduction to the city and doesn’t take too long. A visit to the Anne Frank house and the Van Gogh Museum are must-dos, and if you visit the city’s large Vondelpark, kids can run and play in the heart of Amsterdam.

Cologne, Germany
It’s a long sail between Amsterdam and Cologne, but this first stop is an impressive one when you make your way to “The Dom,” Cologne’s towering cathedral. After taking in the church, stroll through the city, which is both bustling with energy but dotted with quiet nooks that introduce you to what’s to come in Germany: charming, flower-filled spaces with cobbled streets. As its name indicates, Cologne is the home of Eau de Cologne, made famous in 1709 at the Farina House — a perfect place to learn more about cologne. The bike paths along the Rhine are flat, well-marked and make for a good family bike ride, as well. 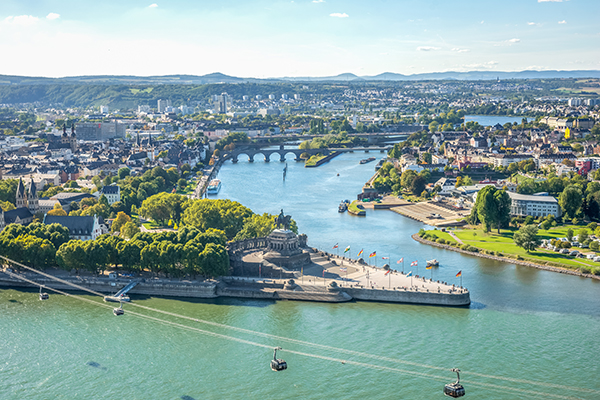 Koblenz to Boppard, Germany
Situated where the Rhine and the Moselle rivers meet, it’s hard to miss the massive monument of Emperor William the First on a horse overlooking the juncture. This is typically the first site people see when arriving in Koblenz. Visitors then take a gondola over the river to visit the fortress and take in the views before strolling through the old town for shopping, dining, and a visit to the twin-towered Basilica of St. Castor. Cruises then depart for Boppard, a charming riverside town filled with shops and restaurants along the river.

Rudesheim
One of the most scenic portions of the Rhine Valley is between Boppard and Rudesheim. This scenic portion of the river cruise is relaxing and welcomes guests to truly relax and take a brief break from sightseeing. There are dozens of castles standing sentry on hills overlooking the river, which is often why the Rhine cruise is called a Castle Cruise. Many families elect to bike along the pathways between the two, as the ride is not too long and is along flat bike paths. Set into the wine hills of Germany, the town of Rudesheim features numerous shops and restaurants along tiny, winding streets. Families take the funicular up the vine-filled hills to visit the Niederwald Monument, which offers panoramic views. Winery tours are available, with many family-friendly and having spaces for kids to play and restaurants. For extra fun, visit the Medieval Torture Museum. 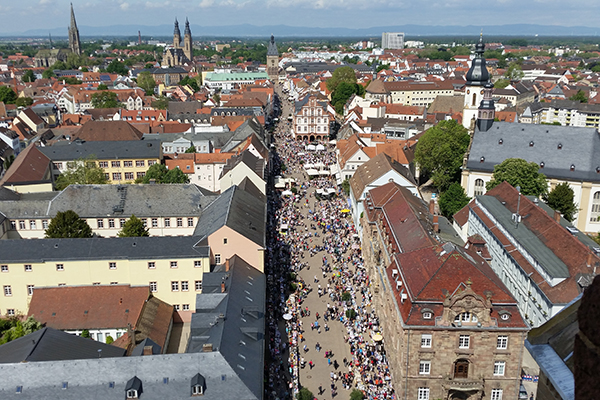 Speyer, Germany
Speyer, or “spire” in English, is well-named as this village’s skyline is dominated by the four red towers of its Romanesque cathedral. A fun stop is the Technic Museum, which features a full-sized jumbo jet and the inner workings of a submarine. Kids can also enjoy climbing through the treetop harness course found in the Climbing Forest. For a longer excursion, visit Heidelberg, about an hour away, to see a baroque town with an impressive castle.

Strasbourg, France
A true gem not to be missed is Strasbourg, which is a large city in the Alsace region of France. Its old town is easy to walk, but hopping on one of the city’s glass-enclosed canal boats for a tour by water really gives visitors the highlights of the city’s architecture. Old Town is a UNESCO site with an impressive Gothic cathedral, and the nearby l’Orangerie is an expansive park filled with shady spots and swans, as well as playgrounds for younger kids. Colmar, France
Another French Alsace town is Colmar, which is filled with half-timbered homes and offers its own flower-lined canals. Nearby, Kaysersberg is a medieval gem with castle ruins and a fairytale feel. Often, cruises will continue back to Germany with an overnight stop at Breisach, and families can enjoy another bike riding opportunity between the ports. When dining in Alsace, be sure to try the flammekueche flatbread: it’s a local specialty.

Basel, Switzerland
As the final stop or the beginning port, Basel is a bustling city with its own airport. (You can fly in and out of this location rather than taking a train between the port and Zurich.) The modern city features a combination of contemporary art museums and baroque structures from its past, including a gorgeous town hall, Rathaus.