2020 is the 100th anniversary of the passage of the 19th Amendment, which gave American women the right to vote. Events to commemorate the occasion are planned in U.S. cities throughout the year.

Key sites where you can soak up “her-story” anytime include Rochester and New York’s Finger Lake Region, known as “The Birthplace of Women’s’ Rights,” as well as Washington, D.C. This year, you can also check out event-packed city-wide suffrage celebrations in popular family vacation spots like Nashville, Boston, Philadelphia and Cheyenne, Wyoming

Grab your daughter and your sister or your mother and set off on a girl-bonding journey celebrating tenacity, progress, equality and female empowerment.

A key figure in the eventual passage of the 19th Amendment, civil rights activist and Rochester resident, Susan B. Anthony, didn’t live to see the fruits of her labor. However, that did not deter her in her tireless crusade to earn women the right to vote. Learn about her pivotal role in the suffrage movement on a tour of the Susan B. Anthony House and Museum, where she based her campaigns and where she was arrested for “illegally” voting in 1872. Down the street, at Susan B. Anthony Square, you and your daughter can pose with Anthony and fellow Rochester reformer Frederick Douglass, whose friendship is depicted in the bronzed sculpture, “Let’s Have Tea.”

Nearby, at historic Mount Hope Cemetery, see Anthony’s gravesite, where every year on Election Day, scores of locals honor her equal rights achievement by leaving “I voted today” stickers on the headstone. From May to October, at six Finger Lakes area sites, including Mount Hope Cemetery, the Susan B. Anthony House will sponsor “Votercade,” a moving artistic celebration of the passage of the 19th Amendment. 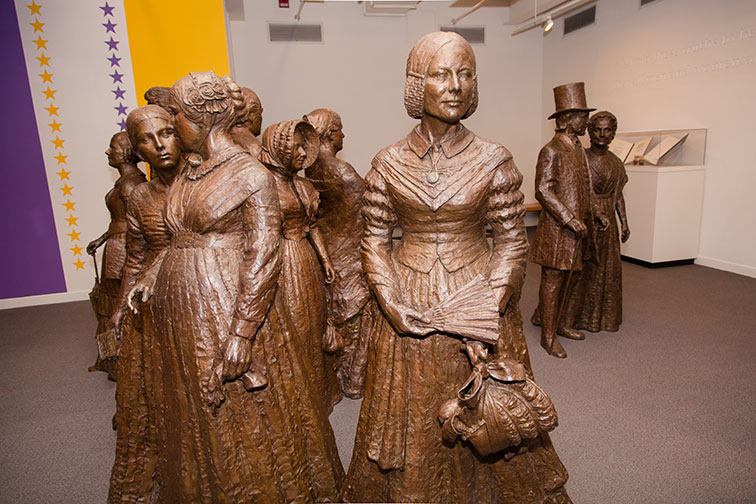 Travel one hour east of Rochester to Seneca Falls in the Finger Lakes, site of the first national women’s rights convention in 1848, where you can learn more about Susan B. Anthony and other major players in the movement. Celebrating its 40th anniversary in 2020, the Women’s Rights National Historic Park includes a Visitors Center, the neighboring Wesleyan Chapel (where the 1848 Women’s Rights Convention was held), the Elizabeth Cady Stanton House in Seneca Falls (seasonal)  and the restored home of activists Thomas and Mary Ann M’Clintock in Waterloo (seasonal).

At the National Park Visitors Center and Chapel, you can see films, hear ranger-led talks and tour exhibits chronicling key figures in the Women’s Rights Movement, the most notable of which are depicted in a bronze statue garden. Teen and college-age girls will enjoy posing with figures of famous “First Wave” activists like Elizabeth Cady Stanton, Lucretia Mott, and Frederick Douglass. For visitors ages 5 to 12, a self-led Junior Ranger program makes the experience more fun.

Not far from the park, the non-affiliated National Women’s Hall of Fame is scheduled to open in its new home at the restored 1844 Seneca Knitting Mill this summer. Over 275 trailblazing women are depicted in the Hall, from Susan B. Anthony and Virginia Apgar (creator of the “Apgar Score”) to entertainer and philanthropist Oprah Winfrey.  While you’re in town, stop at WomanMade Products, a female bonding mecca known for souvenirs with tongue-in-cheek feminist and suffrage slogans. Café 19, a cozy spot celebrating the passage of the 19th amendment, offers coffee, tea and a place to plan the next stop on your girl-oriented vacation “crusade.”

Have some extra time on your hands? Drive another hour east to Fayetteville, New York, to learn about an often overlooked—but also key—figure in the women’s rights movement. At the Matilda Joslyn Gage House, learn about the New York activist who, along with friends Susan B. Anthony and Elizabeth Cady Stanton, played an integral role in the achievement of voting rights for women.

If your daughter is 16 or older, consider ditching the car and taking a Finger Lakes New York suffrage tour together on two wheels instead. Rochester-based WomanTours is offering a summer Suffrage Centennial Bicycle Tour. Stops on the four-day all-female Inn to Inn bike tour include the Susan B. Anthony House, Mt. Hope Cemetery and Women’s Rights National Historic Park. 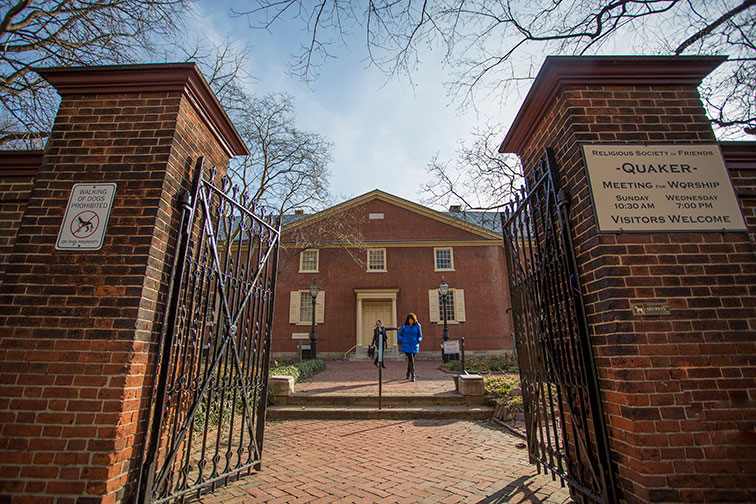 The City of Brotherly Love is also a city of sisterly affection; in fact, it’s changed its nickname to the honorary “City of Sisterly Love” for the women’s suffrage centennial. Start a suffrage-themed tour at the Kimmel Center, where, through September 30, mothers and daughters can learn about advancements and challenges related to gender-based political, economic, educational and leadership rights in “Seat at the Table,” a free interactive exhibit.

Did you know that Quakers were major players in both the anti-slavery and women’s rights movements? Take a tour (or attend a service) at the Arch Street Meeting House and learn more! The historic site was a chosen meeting place for Quaker and Philadelphia resident Lucretia Mott, co-founder of the Female Anti-Slavery Society and a planner of the first Women’s Rights Convention in Seneca Falls in 1848.

Want to add more mileage to your journey to empowerment? Philadelphia’s Drexel University is leading the way in getting women registered to vote in the 2020 election, and this summer, you and your daughter can get on board!  If you have the time and, you can follow female race car drivers on an overnight road rally from Philadelphia to Seneca Falls, where you can see a stunning stone wall display of the “Declaration of Sentiments,” which was penned by Mott.

You can also visit the Women’s History Trail of Greater Philadelphia, with 13 Philadelphia area sites paying homage to local women and their intriguing contributions. 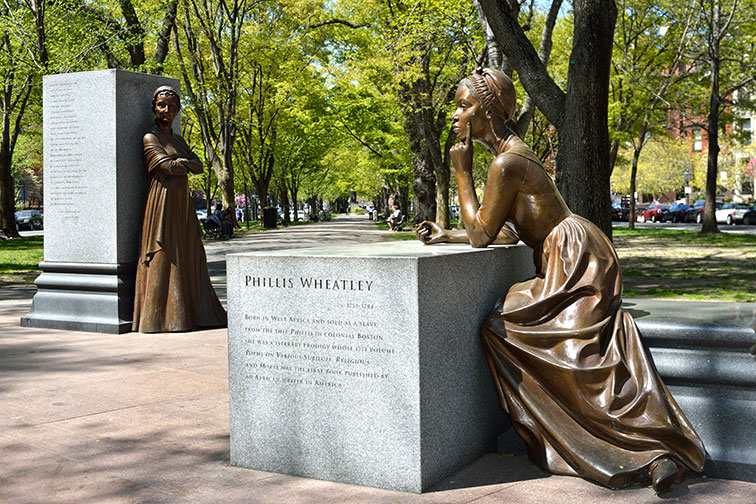 Rich in history and highly walkable, Boston is a favorite spot for families looking to explore places that kids have learned about in school. Boston Women’s Heritage Trail offers free itineraries for a variety of self-guided walking tours, including several youth-designed women’s history and suffrage themed tours. Boston by Foot features 1.5-hour historical walking tours, including “Boston Women Finding Their Voice,” “Road to the Vote: Boston Suffragists” and “Fierce and Feminine: Great Women of Boston.” 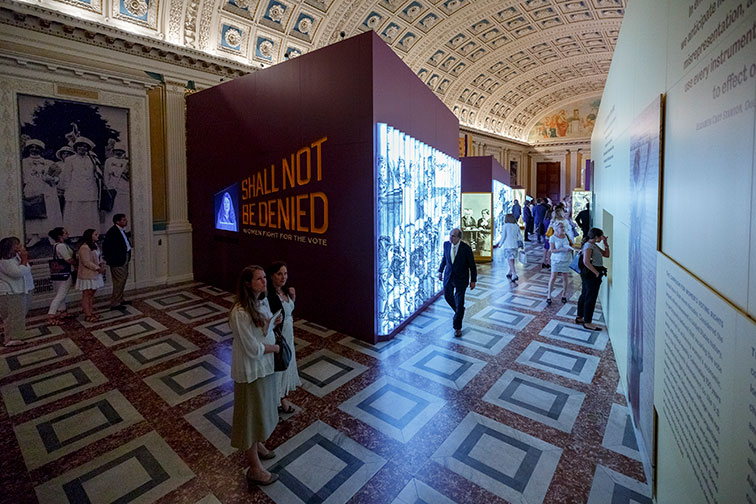 The nation’s capital is hosting many special events and exhibitions honoring the centennial ratification, and there’s even more reason to celebrate, as admission to a majority of them is free! At the US Capitol Visitor’s Center, you can take a Votes for Women walking tour, which departs at 1 p.m. Monday to Thursday. In the Capitol Rotunda, take time to admire, “Portrait Monument to Pioneers of Suffrage Movement.” Hidden away for 75 years, the sculpture of key suffragists Susan B. Anthony, Elizabeth Cady Stanton and Lucretia Mott reclaimed its rightful spot in history in 1997 and remains on permanent display.

At the Library of Congress, mothers and daughters will gain an increased appreciation for female grit and tenacity after viewing “Shall Not be Denied: Women Fight for the Right to Vote.” Meanwhile, the Smithsonian National Museum of American History unveils two suffrage-themed exhibitions in 2020.  Don’t miss “All Work and No Pay” and “Creating Icons,” both of which lend insight into how far women have come—and the work that still lies ahead.

A suffrage tour of Washington wouldn’t be complete without a visit to Belmont-Paul Women’s Equality National Monument. The national historic site honors Alice Paul, who took the suffrage baton from Susan B. Anthony and Elizabeth Cady Stanton after their deaths in 1902 and 1906. In 1920, Paul brought the reform relay team to vote-winning victory when the 19th Amendment was finally ratified. At the site, kids ages 5 to 12 can earn a suffragist badge (and maybe even some extra credit points from their history teacher back home!) by completing a Junior Ranger booklet.

Beyond its rugged beauty and cowboy rodeo legends, Wyoming is much more than wild western culture. In fact, Wyoming’s capital city, Cheyenne is known as the birthplace of women’s suffrage. In 1869, Wyoming was the first U.S. state to grant women the right to vote, earning it the nickname of “The Suffrage State” and later, “The Equality State, ”as well as bragging rights as the original feminist-friendly locale.

Through December, 2020, Wyoming will celebrate the 150th anniversary of women’s suffrage. Highlights that mothers and daughters will enjoy together include a suffragette high tea at the historic Plains Hotel, held on the second Thursday of the month, and “Women in Wyoming,” at Buffalo Bill Center of the West in Cody, an exhibit featuring a native female photographer’s view of brave, strong Wyoming women. Nashville is famous for its music and arts scene, but did you know it also has a significant civil rights reform history? Throughout 2020, the Music City celebrates the suffrage centennial with arts, music, dance and dining events, many of which are mother-daughter friendly. At the Tennessee State Museum, learn about notable female figures in the Volunteer State suffrage movement. At The Frist Art Museum, “We Count: First Time Voters” is open through May, while in June, the Nashville Library will unveil a permanent exhibit chronicling Nashville’s role in earning national voting rights for women.

In summer 2020, the historic Hermitage Hotel, once a headquarters for the women’s rights movement, will host a series of entertainment-oriented suffrage celebrations. On the line-up: theatrical suffrage teas, performances by female musicians and a multi-course Yellow Rose Gala dinner created by female chefs from across the country. Check the hotel event website for tickets and details.

Writer Jackie Perrin has covered the best of family travel for nearly two decades, for media ranging from newspapers and magazines to TripAdvisor.com. At home and on the go, she manages a crew of companions. Follow her on Pinterest, TripAdvisor and Instagram, @NYfamtravels.