This December, whether you live near these cities or are traveling to them on vacation or to visit family during the holidays, be sure to check out some of these fun holiday celebrations! Atlanta
Since snow is not always on the books for Southern winters, Atlanta’s Stone Mountain Park features Snow Mountain, which opens December 11. Families can go tubing, ride Avalanche Alley, play in the snow at Fort Snow, make snowmen in Snowman Valley, and build igloos in Igloo City. Stone Mountain’s Christmas events include a tunnel of lights and snows in Wonderland Walkway, a nightly Christmas parade featuring Santa Claus, and a number of holiday musicals, films and revues. And if you stick around Atlanta for the New Year, catch the New Year’s Eve Peach Drop in Underground Atlanta. 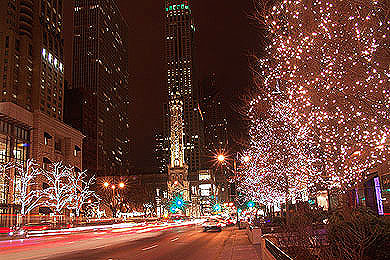 Chicago
Once Chicago’s Magnificent Mile Lights Festival, an illuminated parade held on November 20, kicks off the holiday season, the entire city is filled with holiday-themed events. The Museum of Science and Industry, for example, will feature over 50 Christmas trees and displays illustrating the winter holidays from around the world through Christmas. At Daley Plaza, Christkindlmarket Chicago brings the German holiday market tradition to the Midwest. 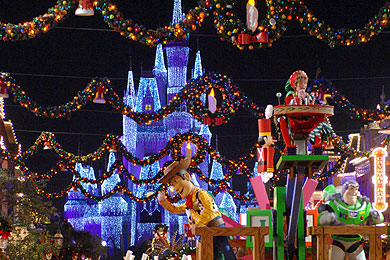 Nantucket
A visit to this island in the winter is a must when it provides a look at Nantucket’s past. The Annual Christmas Stroll Weekend (December 3 to 5) is a highlight of the month-long Noel Celebration, with Santa and Mrs. Claus riding up Main Street in a horse-drawn carriage, Victorian-costumed carolers, bell ringers and musicians performing around town, and the town decorated for the holidays right out of a picture book. The Noel Celebration includes holiday house tours, holiday concerts, ice skating and other special events.

Newport, Rhode Island
The famed Newport Mansions are a true site to behold come the holiday season. Visit through January 2 for a peek into the grand life of Newport’s wealthiest with oversized Christmas trees, flower arrangements, wreaths and garland at The Breakers, The Elms and The Marble House. Daytime tours are available at $28 for adults and $9 for children 6 to 17 (under 6 are free). 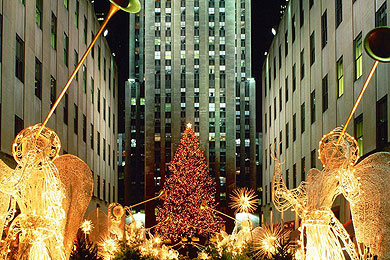 New York
Of course the king of holiday events is the nation’s largest city: New York. Beginning with the Macy’s Thanksgiving Day Parade, the city features a number of holiday-themed events to enthrall the family. On November 30, Rockefeller Center’s towering Christmas tree — covered in 30,000 lights across five miles or wire — will be lit, following concerts and performances in the Center. The parties culminate with the biggest New Year’s Eve event in the world: New Year’s Eve in Times Square, where the Big Apple rings in the New Year. The city’s heralded shops also feature award-worthy window displays come the holiday season, including Macy’s, Bloomingdales and Saks Fifth Avenue. 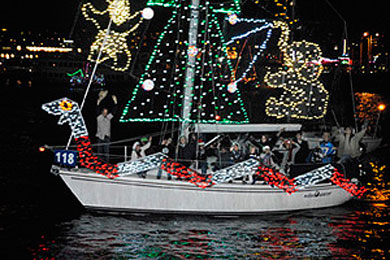 San Diego
Don’t let San Diego’s warmer weather fool you, the city welcomes in the holiday season with the best of them. Through January 2, the 15th anneal Holiday of Lights at Del Mar illuminates San Diego County with more than 400 animated and lighted holiday scenes. Hop aboard the Holiday Hayride for an evening tour and end with Hot Chocolate and a cookie. On December 12 and 19th, head to San Diego Bay for its 39th annual Parade of Lights. Fireworks kicks off the event featuring boats bedecked in holiday lights sail from Shelter Island into the downtown waterfront. 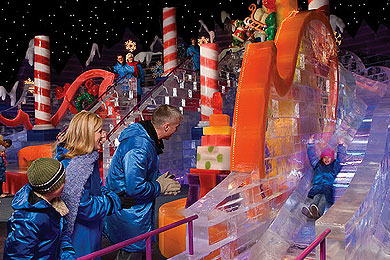 Washington, DC
Looking for a true winter wonderland? Visit the Gaylord National’s ICE! At the National Harbor. More than two million pounds of ice and 15,000 square feet of attractions allow kids and their parents to play in the ice. “How the Grinch Stole Christmas” will also be featured in a fully interactive storybook display. The attraction is open through January 9, with adult tickets $21, kids 4 to 12 $13, and children under 3 free. The resort will also feature nightly snowfall in the atrium, an outdoor skating rink, and special events. While in DC, visit the White House to see the National Christmas Tree, lit on December 9 and remaining so until the New Year.