We have plenty of knowledge for what you SHOULD do during your family vacation, but it’s time to share our hard-earned lessons on what NOT to do when traveling with kids. While one mother and reader of Family Vacation Critic, Melissa Bettinger, jokes, “don’t take the kids,” we have some tips to keep in mind when traveling with your brood. 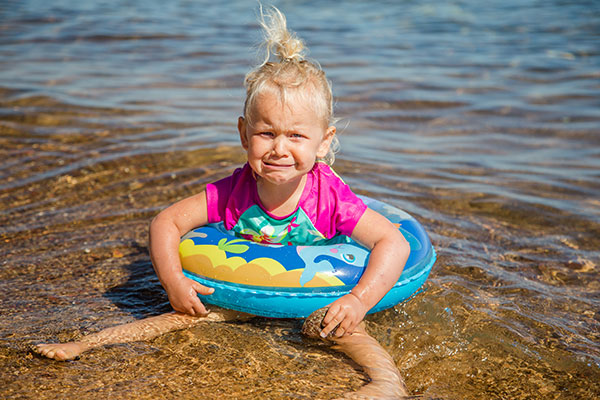 “Book a suite so your family has space to spread out, and you’ll often have a refrigerator for snacks and drinks,” says family travel expert, Lissa Poirot. “It especially comes in hand at night when young kids go to bed early; mom and dad can stay awake in the living room. It doesn’t need to be expensive, either — consider hotels where kids stay and eat free.”

“Even though ‘Rome wasn’t built in a day,’ we attempted to see it in such during a Mediterranean cruise. We toured as much of the city as we could in one day and returned to the ship in a daze,” recalls Christine Koubek, mom of two. “My advice is to see those can’t-miss places on your bucket list and adjust your sightseeing the day after. For example, on our cruise, the ports of call for Rome and Florence were on back-to-back days. Instead of two full sightseeing days in a row, we opted to spend just a few hours that second day walking around Lerici, a small Italian coastal village, then let the kids spend the rest of the day in the pool.”

“Don’t forget to get seat assignments early, as you don’t want to haggle with strangers to take your middle seat for their aisle seat just so you and your child can sit together,” says Steve Jermanok of Active Travels. “And don’t plan a connecting flight with only 45 minutes between flights. We missed our connecting flight in Charlotte back from Jamaica after trying to run our stuff from one gate to another on the other side of the airport. My daughter was crying from the stress.” On the flip side, Jermanok also advises not to plan extra-long layovers. “We tortured ourselves by planning a layover in Paris for eight hours on our way to Israel, but had to stay in the airport rather than see the city.”

4. Don’t cater to your kids the whole time.

“I think the biggest mistake is always catering to your kids,” says contributing writer, Lisa Milbrand. “It’s hard to avoid the McDonald’s and playground-kind of vacations when kids are super young, but you need to be willing to take that risk and let them try something more challenging. We traveled to China with a 4-year-old, we took my then-3-year-old to the ballet, and my kids have both eaten successfully in a five-star restaurant. We educate our daughters on the type of behavior they’ll need before the activity (i.e. no talking during the show), and just have at it. Yes, we’ve had to leave a performance early and skip half of an art exhibit. But generally, we have amazing experiences and my daughters like sushi better than chicken nuggets.”

“The only thing worse than a long flight is a long flight with kids, so don’t ever come unprepared,” says frequent contributor, Andrea Guthmann, mom of three. “I load up my daughter’s backpack with boredom busters. We start the flight with stuff that’s good for you… books, crayons, playing cards. Then we break into the goldfish crackers or other snacks. Finally, when I’m really in need of a distraction, I start pulling out the electronics. We have an iPad loaded with kids’ games. It does the trick every time. Just make sure it’s fully charged!”

Related: Surviving the Airport with Kids

6. Don’t compromise on a hotel location just to save.

On our most recent trip to Orlando, I did a pretty good job following my “Not To” rules, with the exception of No. 3, “Failing to Consider Traffic When Selecting a Rental Location,” which turned out to be a BIG mistake,” says Jackie Perrin. “Lesson learned: if you’re going to Disney and traveling at a peak time, it really pays to stay onsite or else within walking distance (or at a lodging which offers a traffic-free commute). Although I thought we knew all the traffic ‘shortcuts’ in town, it’s hard to completely avoid bumper-to-bumper traffic during the holidays. In this case, had I jumped straight to Rule No. 9, “Not Taking Advantage of Local Knowledge” (which I unfortunately also failed to follow), and consulted my local sources about holiday traffic in relation to our lodging, I would have known that we were in for a waiting game and adjusted our plans accordingly.”

Lisa Meyers McClintick remembers checking into a disappointing mountain resort and debating the hassle and stress of finding new lodging. The upside: packing up and checking out led them to discovering YMCA of the Rockies, one of their all-time favorite family destinations. Plan B became an A+.

“Of course, traveling with the whole gang is great. But as an aunt to four fabulous nieces, I’ve really enjoyed the times I’ve had to take the girls away, one-on-one, for a different sort of bonding experience,” suggests travel writer and new mom, Terry Ward. “Siblings need to feel like individuals, too, and a short overnight or weekend trip with one kid at a time can give them a different kind of confidence.”

Related: One on One Trips With Kids

“We’re a road-tripping family, so we have the planning part down pat. We know it’s not ‘cheap’ to drive anywhere. For the four of us, driving from New York to Florida was more affordable than flying during the holidays, when airfares skyrocket in line with demand. But it was by no means cheap after factoring in gas, meals and one hotel overnight. By the way… taking the train? Almost as expensive as flying!

10. Don’t leave kids out of the planning process.

“Don’t leave kids — especially teens — out of the planning process, particularly if you aren’t headed for an all-inclusive resort or a cruise, where they can safely go their own ways,” says travel writer, Geri Bain. “There’s nothing less fun than sightseeing with a sullen adolescent or teenager who didn’t expect to be dragged to yet another museum.”

Lastly — and we hate to laugh, but — “Don’t put your kids down for a nap wearing a swim diaper. They do not work the same as a regular diaper,” says contributing writer, Karon Warren. “Thankfully, we had put a towel underneath my daughter before laying her down.”