I grew up in Florida, a claim that often is followed by the joke that no one lives in Florida because it’s role as one of the top destinations for vacationers and “snow birds” (people who live in Florida in the winter months to escape brutal northern winters). But yes, I grew up there and still consider it home. To me, a seeker of new adventures and sights, Florida was the perfect place to live. I could hop in my car and spend a weekend exploring a new destination.

When family travelers think of Florida, they think Disney World and Orlando, as well as miles of beaches. But Florida is so much more than amusement parks and beaches. Want to take a peek at another side of Florida? Here are 5 places the kids will enjoy: 1. Cape Canaveral. The “Space Coast” of Florida is home to Kennedy Space Center. Here is where our space shuttles have rocketed out of the Earth’s atmosphere with well-deserved pomp and circumstance. For visitors, Cape Canaveral gives families a glimpse of air and space life. Tours include a look at the LC 39 Observation Gantry, the Apollo/Saturn V Center, the Space Shuttle launching pad, the Vehicle Assembly Building, among others. For your daredevil teens, check out the skydiving attraction in Cape Canaveral. And nearby is the beach, Daytona and Disney — so you won’t have to miss the mouse and sand. 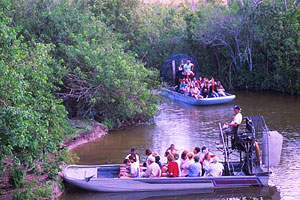 2. Everglades. The land of 10,000 islands is the only place in the world with its own type of subtropical ecosystem. The endangered land is also home to Florida’s engendered species, including the Florida panther and manatees. Not only has the U.S. deemed it one of its National Parks, it’s a gorgeous place to visit, filled with sights rarely found anywhere else in the country. Airboat rides, swamp buggies, kayaks, biking and walking tours are available (alligators are pretty much a given sight to see here), and families are invited to camp and fish. 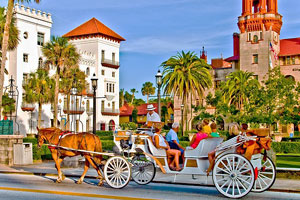 3. St. Augustine. No, Florida wasn’t one of the 13 colonies, but the Spanish occupied it before America was a gleam in the eye of an English king. St. Augustine is one of my favorite towns, with a rich history as the nation’s oldest city. The historic district is filled with shops and restaurants with views of the ocean and directly across the street from Castillo de San Marcos, used by the Spanish to ward off invaders of the New World. Here is where Ponce de Leon claims to have found the Fountain of Youth, and an archeological park even lets you bottle some of the natural spring. 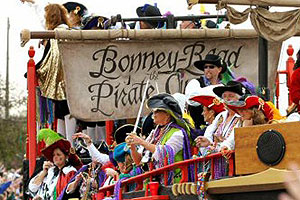 4. Tampa. Many think of Tampa as being home to Busch Gardens. True, but many miss two other big highlights: Pirates and a Cuban heritage. The annual Gasparilla Pirate Fest, held every January, features a pirate parade, dancing in the streets and pirate ships invading the harbor. It can get a bit rowdy, which is why there is a Children’s Gasparilla Extravaganza with a preschooler event, parade and “Piratechnic” Extravaganza. Ybor City in Tampa is a National Historic Landmark District and home to the city’s Cuban heritage. Nearly 1,000 historic sites occupy the 60-acre district, including museums dedicated to Cuban independence and its revolution. 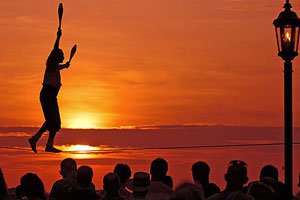 5. Key West. I don’t think I’ve been to the beach more than once during any of my visits to the Florida Keys; I find there is too much more to see and do than lounge on the sand. The southernmost point of the U.S. (it’s marked; get your photo taken here), is filled with colorful characters (most notably: Hemingway), water sports and history of its own. For history, check out Fort Zachary Taylor, which protected the island and entry point into America for generations. Ernest Hemingway’s house is open for tours — have the kids seek out the numerous five-toed cats roaming the property, descendants of Hemingway’s original pets — and end your days at Mallory Square, where street performers entertain as gorgeous sunsets melt into the sea before your very eyes.