St. Patrick’s Day is usually associated with [green] beer and, well, more beer. And though partying is par for the course on March 17, there’s still plenty of kid-friendly fun to be had in these cities, from festivals to St. Patrick’s Day parades to dancing and food — Shepard’s pie, anyone? 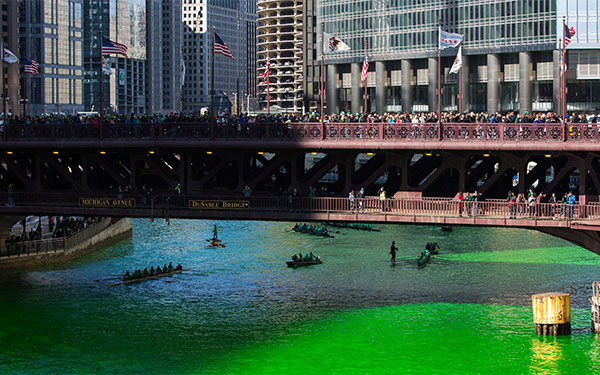 Chicago
The Windy City‘s St. Patrick’s Day Parade always occurs the Saturday before the holiday (if the holiday isn’t already on a Saturday, that is). It begins at the corner of Columbus Drive and Balbo, and continues north to Monroe, entertaining families with music, floats and step dancers for three hours straight, rain or shine. The city’s biggest spectacle, however, takes place when the Chicago Journeymen Plumbers dye the Chicago River green, drawing thousands of spectators. For the best views of this annual tradition, head to the intersection of Michigan Avenue, Wacker Drive and the Chicago River, or the west side of Columbus Drive Bridge.

San Francisco
One of San Francisco‘s most popular events is its annual St. Patrick’s Day Festival and Parade. Hundreds of lively floats, dance troupes and marching bands begin their journey at the corner of Market and Second street and continue on to Civic Center, where a family-friendly festival awaits. Here, they get a true taste of Irish culture, including everything from food to history. Additionally, many of the city’s pubs and restaurants start the holiday festivities a few days in advance by hosting block parties, and the city hosts an Irish-American Crossroads Festival, as well.

Boston
Boston hosts not one, but two St. Patrick’s Day parades each year. Its traditional holiday parade begins in the early afternoon, and is followed by the St. Patrick’s Peace Parade, organized by the Veterans for Peace. The city also provides alcohol-free Family Zones, which are often held at The Action Center, Old Colony and The Laboure. Each venue has a theme and offers snacks and children’s activities, such as arts and crafts, plus a prime spot to watch the parade.

Washington D.C.
For St. Patrick’s Day, Washington, D.C. hosts the National ShamrockFest with something for all ages, including carnival rides, games, food, an Irish Village and over 40 bands and DJs on nine stages. Constitution Avenue also comes to life with a two-and-a-half hour themed parade of floats, dancers, marching and pipe bands, military, police and fire departments. After the parade, take the kids to a local Irish pub where you’ll listen to Celtic music as you eat authentic favorites like Irish beef stew.

Savannah, Ga.
For nearly two centuries, Savannah has celebrated St. Patrick’s Day with an electrifying parade — the second largest in the United States. St. Patrick’s Day celebrations actually begin two weeks before the parade, however, with events like the Greening of the Fountain in Forsyth Park and the Celtic Cross Mass and Ceremony. On the day of the parade, mass is held at the Cathedral of Saint John the Baptist, and the parade follows, offering the perfect mix of Irish culture and Southern charm.

Scranton, Pa.
Each year, Scranton, Pennsylvania, hosts one of the largest St. Patrick’s Day parades in the country. After an early mass (10 a.m.) held at St. Peter’s Cathedral, families line the streets to watch professional bagpipers, step dancers, bands and even celebrities and politicians. Hillary Clinton and Andrew Buckley of “The Office” have made appearances in years past.

Dublin, Ohio
There are several U.S. cities named Dublin, but none of them pay homage to St. Patrick’s Day like Dublin, Ohio does. The city’s festivities begin with a hearty pancake breakfast and an “Inflation Celebration,” where families can actually watch parade floats come to life! When the floats are ready, the parade commences and proceeds through the downtown area. After the parade, visitors like to explore the Historic District as they sip Irish tea, eat Irish potato chowder and listen to Celtic music.