Perhaps the biggest (and most important) question that comes to mind when considering a Disney vacation with kids is what age is actually best for Disney, whether it’s a Disney theme park or cruise vacation.

There are so many variables that go into making this decision and choosing what’s right for your family, but to help you answer this age-old question (pun intended), we’ve broken down the best age for Disney into three categories: Walt Disney World Resort in Orlando, Florida; Disneyland Resort in Anaheim, California; and Disney Cruise Line. 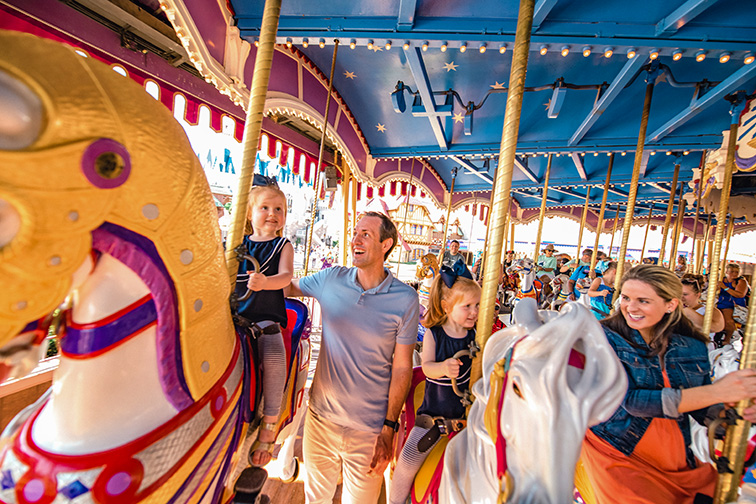 Disney World in Orlando, Florida, is the size of San Francisco (seriously!), with four theme parks, two water parks, dozens of resort hotels, a dining and entertainment district, golf courses and more. It’s easy to get overwhelmed by the sheer size of the resort, and even easier to be concerned about whether or not your kid(s) will remember and appreciate the experience.

Disney World is easily doable for kids ages 3 and up, especially if you take breaks, bring a Disney-approved stroller, and know exactly where to go within the parks. If you’re concerned about your child remembering the trip, consider waiting until your child is at least 5 years old to visit. Here’s what Disney World offers for various age groups:

Disney’s Magic Kingdom (Ages 3 to 12)
Kids ages 3 to 12 will enjoy this park best. There are multiple rides that don’t have a height requirement like many of the other parks’ attractions do. Kids can see their favorite Disney princesses or Mickey Mouse and his pals, and even dine in Beast’s Castle at Be Our Guest.

Magic Kingdom is filled with attractions that even the littlest of kids can enjoy. While most of them are in Fantasyland directly behind Cinderella’s Castle, you can find others scattered throughout the park, including the Jungle Cruise, the Tomorrowland Speedway, and Dumbo The Flying Elephant.

For older kids, the “Three Mountain Challenge” is a fun activity. This challenge includes riding Space Mountain, Splash Mountain, and Big Thunder Mountain Railroad all in one day.

Disney’s Animal Kingdom (Ages 7 to 12)
For kids who love nature and animals, Disney’s Animal Kingdom is a must. We love this park for kids ages 7 to 12 because they can enjoy things at their own pace and feel the true sense of exploration in a park filled with side trails and animals around every corner. Rides that kids will love at the park include Kilimanjaro Safaris and Avatar Flight of Passage.

Disney’s Hollywood Studios (Ages 3 to 17)
Disney’s Hollywood Studios is often seen as a park for older kids, but it’s great for little ones too, which is why we say it’s suitable for ages 3 to 17. The park is home to everything Disney Junior, which smaller kids will love. They can enjoy a dance party, a show, and even meet their favorite Disney Junior characters. Younger kids will also enjoy experiencing Toy Story Land, which is home to three rides: Slinky Dog Dash, which is a family coaster; Alien Swirling Saucers, which is a fast-paced spinning ride; and Toy Story Mania, a family shooting game.

Older kids and adults at Hollywood Studios will love checking out Star Wars: Galaxy’s Edge, and its newest attraction, Star Wars: Rise of the Resistance. Throughout the land you’ll be immersed in your very own Star Wars story, be able to eat and drink the flavors of Star Wars, build your own droid or lightsaber, fly the Millennium Falcon on Millennium Falcon: Smugglers Run, and escape the grips of The First Order and Kylo Ren on Star Wars: Rise of the Resistance.

Epcot (Ages 10 to 14)
Epcot is often seen as Disney’s more adult-friendly park. The park is divided up into two major segments, World Showcase and Future World. Kids ages 10 to 14 will really enjoy Epcot, not only because of some of the major thrill attractions like Mission: SPACE and Test Track, but also because of the sense of adventure that comes with exploring World Showcase. Here, kids can try foods from countries around the world, chat with Cast Members about their homeland, and even take on a mission with the gang from DuckTales in the upcoming Disney’s DuckTales World Showcase Adventure, which is an interactive game that kids and families can play through the Play Disney Parks app. 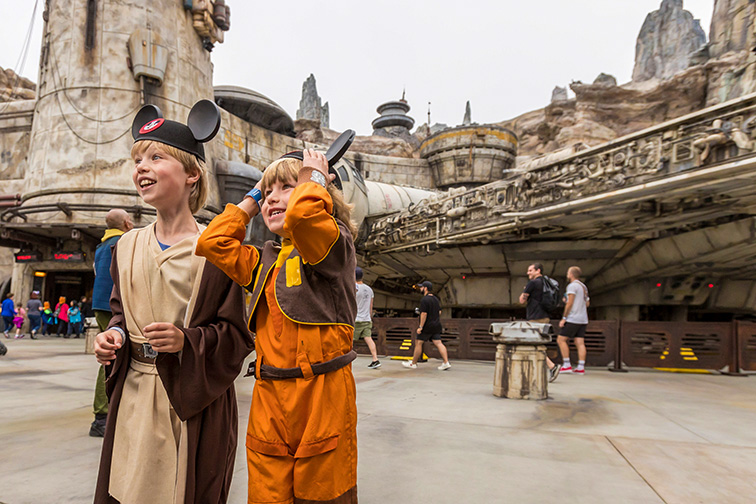 Disneyland Resort in Anaheim, California, is much smaller than its Florida counterpart, with two parks, three resort hotels, and a smaller downtown dining and entertainment district. If you can choose between Disneyland and Disney World for a first visit, we definitely suggest Disneyland because of its size and ease of getting around.

Disneyland Park (Ages 3+)
Disneyland Park is the quintessential Disney park, and what many people think of when they hear the word “Disney.” Inside the gates of Walt Disney’s original park, you’ll find rides and activities for kids of all ages! The park boasts a wide variety of attractions for little kids, including Peter Pans’ Flight, Buzz Lightyear’s Astro Blasters, and Pirates of the Caribbean.

For older kids, Disneyland hosts its own Star Wars: Galaxy’s Edge complete with everything mentioned above from Hollywood Studios at Walt Disney World, fun time abound in Adventureland with Indiana Jones Adventure and Critter Country is the spot to be for Splash Mountain!

Disney California Adventure (Ages 10 to 14)
Kids ages 10 to 14 are in for a real treat when they go to Disney California Adventure. The park is filled with thrill rides like Guardians of the Galaxy – Mission: Breakout, and immersive lands such as Cars Land. Older kids will also love the Redwood Creek Challenge Trail, where they can test their skills on a variety of obstacles. 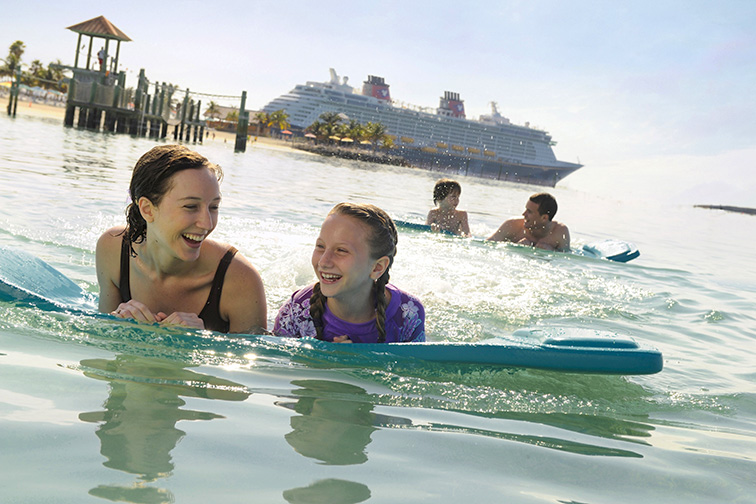 Disney Cruise Line is Disney’s best (nearly) all-inclusive vacation experience, where families can step aboard one of four different cruise line ships for the vacation of a lifetime. The ships are outfitted with themed kids’ clubs for babies on up to teens and character meet-and-greets. Kids ages 5 to 17 will enjoy a Disney Cruise Line vacation most because of the dedicated spaces just for them, where parents will feel comfortable leaving them in the hands of Disney trained Cast Members for the evening while they enjoy a relaxing dinner date aboard the ship.

On Disney Cruise Line there are also multiple opportunities throughout the day to come together as a group to enjoy vacation as a family. Great family activities include the dinner shows, drawing classes, trivia, and lounging by the pool watching a movie on the big screen.

Related: What to Pack for a Disney Cruise: The Ultimate Packing List

Megan is a theme park expert and frequent traveler to magical places. She covers all things Disney and Universal and runs marathons for fun. She thinks you can tell a lot about someone by the name of their signature lipstick, and hers is NARS Dragon Girl. You can follow her adventures on Instagram and Twitter.