Whether you’re a passionate fan or a casual admirer of America’s national pastime, there’s no denying that three hours of quality time with your family in a ballpark is a great way to spend an afternoon or evening. That’s why many of us make it the cornerstone of our summer travels, knowing it’s much easier to snag a coveted Yankees or Red Sox ticket on the road.

Once in town, take advantage of the opportunity to see all the favorite family sites, which can include a tour of the baseball stadium when the team is not playing! Visiting these 10 U.S. baseball stadiums will ensure your family vacation is a home run.

Located near San Diego‘s Gaslamp Quarter, Petco Park has a retro appeal that stems from the use of the four-story red brick Western Metal Supply Company building, dating back to 1909. A really innovative aspect of the design is the so-called “Park at the Park,” a 2.7-acre lawn beyond centerfield where you pay about $15 to $30 and have decent views of the ballgame.

Specific for kids, The Beach is the sandy area perfect for playing during the seventh inning stretch, while mom and dad down ribs and burgers from Randy Jones Barbecue, named after the former Padres relief pitcher. Try to get tickets for specific themed days at the park, like KidsFest, a monthly offering that allows children to get fielding tips from the pros themselves after the game. 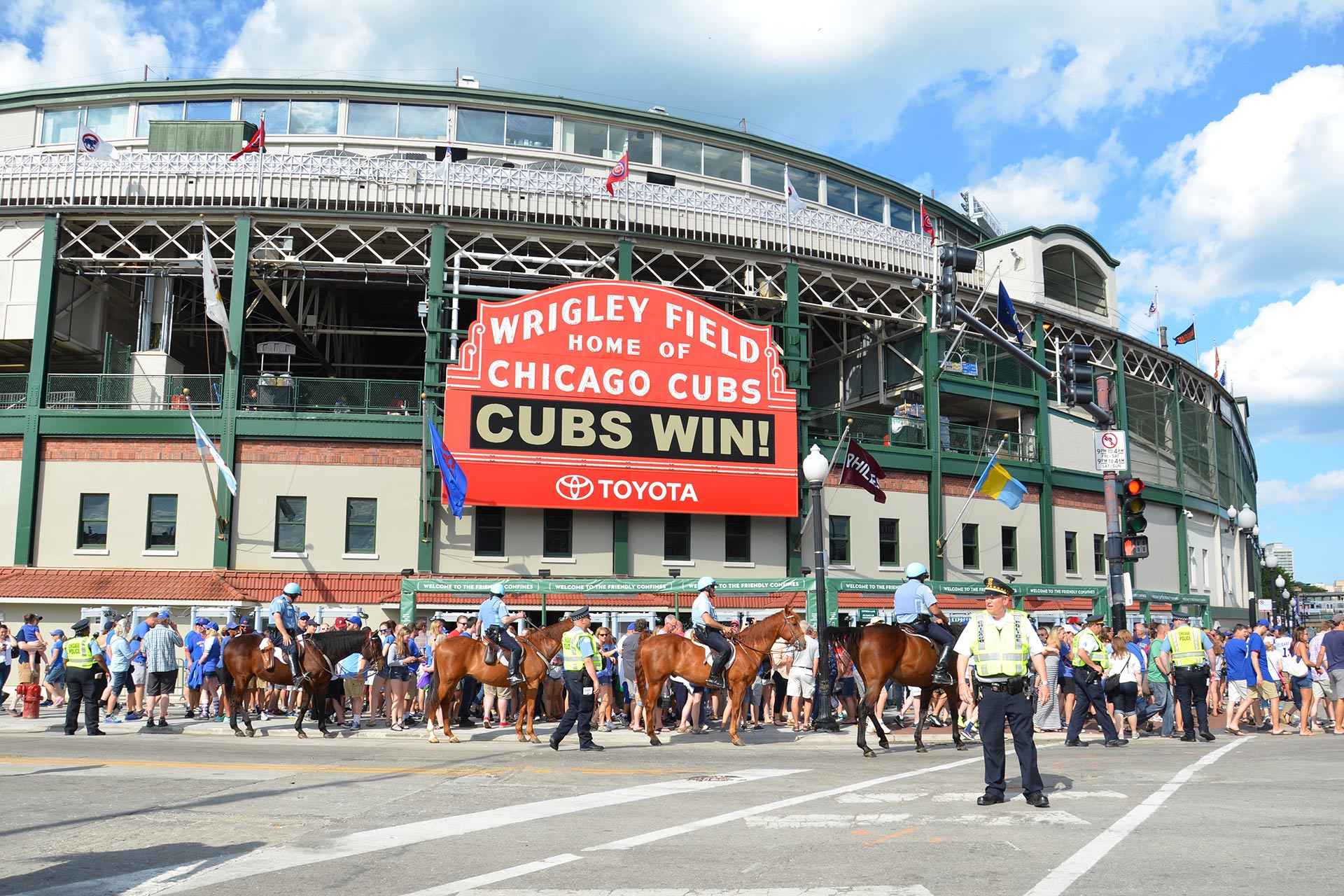 Smack dab in the center of Wrigleyville, where the “L” train rattles by and people can still watch the game from neighboring rooftops, Wrigley Field is an icon in Chicago. Enter this historic gem and you’re immediately transported back to yesteryear, half expecting Ernie Banks to still be in the lineup. Sit in the bleachers near the iconic ivy covered outfield wall or in the upper deck for views of Lake Michigan. Get tickets to a Sunday game if you can and kids can run the bases after the game, too!

Afterward, rent a bike at Navy Pier and ride along the waters of the great lake, backed by the formidable skyline, and then take a breather on the sands of Oak Street Beach. Also check out the Ape House at the free Lincoln Park Zoo, and the silver “Bean” sculpture at Millennium Park.

Making its debut in 1992, Oriole Park at Camden Yards really set the standard for building a park for baseball games only, going against the trend of building one stadium for both baseball and football teams. Based on ballparks from the 1930’s and 40’s, this Baltimore field succeeds in giving fans a close-up view of the field, much like Fenway Park and Wrigley Field. Grab some barbecue from Boog’s, owned by former Orioles slugger, Boog Powell, and grab any seat, since the sight lines are all good.

In your downtime, head to Babe Ruth’s birthplace and the National Aquarium. Also pencil in a couple extra days for the beaches of Ocean City, Maryland.

New York City‘s Yankee Stadium was unveiled in 2009, an exact replica of The House That Ruth Built. The one major difference is that the seats are far more comfortable than the 1923 model. All baseball fans, not just Yankee lovers, will enjoy walking through Monument Park, an open-air museum that pays tribute to such Yankee greats as Babe Ruth, Lou Gehrig, Joe DiMaggio and Mickey Mantle.

Once the game starts, realize that New Yorkers are notorious for booing everything and everyone, including you once you start cheering for the opposing team. Since you’re in “Da Bronx,” you’d be wise to check out the reptile house at the Bronx Zoo. Also visit the Italian hub of Arthur Avenue for a great meal after the game. The waiters at Dominick’s (2335 Arthur Avenue) belt out the day’s menu, which typically includes large family-style pastas loaded with seafood, stuffed veal or baked ziti.

You’ll be glad to bring the family to the shores of Lake Erie to catch a game at Progressive Field (formerly Jacobs Field), one of the most intimate ballparks in the country. The stadium has a retro appeal, like Oriole Park at Camden Yards, yet it’s encased in white steel, which gives it a more modern look. All seats have a great vantage point and the concourses are wide and easy to navigate. Plus, if you can secure tickets for a Friday night game, you’ll marvel at the fireworks display after.

Also, it’s a breeze to find parking in this section of downtown Cleveland. Spend the morning listening to the tunes at the nearby Rock and Roll Hall of Fame, and add an extra day to your trip to try the 18 roller coasters at Cedar Point—that’s more roller coasters than any other amusement park in the world.

Smack dab in the center of Denver’s LoDo neighborhood, the first settlement in the city, Coors Field was built for hitting homers. The ball also tends to travel further at these mile-high heights. So get ready to sit back and see some home runs as you stare in awe at the snowcapped Rocky Mountains.

The 38,000-square-foot rooftop deck features dining options, an urban garden setting, VIP cabanas, TVs, live entertainment and breathtaking views of downtown Denver. All ticket holders are welcome to the Rooftop, though guests can purchase specific tickets for the standing-room-only area.

Denver is a family-friendly city with numerous other sites like the Museum of Nature and Science, and the playgrounds, climbing walls and splash fountains of Westlands Park.

Spectators have a hard time concentrating on the game at PNC Park, dazzled by the towering skyline of Pittsburgh, the Roberto Clemente Bridge over the Allegheny River and Mount Washington. At night, when the buildings sparkle, it’s mesmerizing. With the worst seat being only 88 feet from the field, you feel like you’re watching a minor league game. Tickets are affordable and Sundays are Kids Day at the park, with extra activities for little ones and time for them to run the bases after the game.

Take time in your schedule to visit the classic amusement park, Kennywood, the Mr. Rogers’ Neighborhood display at the Children’s Museum and the fossil collection at the Carnegie Museum of Natural History.

Red Sox faithfuls have Fenway Park, one of the country’s most storied stadiums. Built in 1912, the historic ballpark is located in Boston‘s Kenmore Square. On game days, from April to October, families can tour the park and see where the Babe played, along with other Red Sox greats like Ted Williams and Carl Yastrzemski. You can enter the dugouts, peek into the scoreboard and even touch the 37-foot-high left field wall, The Green Monster, an enduring symbol from yesteryear. If you’re lucky, you’ve snagged one of the three rows of seats atop the Green Monster.

While in town, take time to walk the 2.5-mile Freedom Trail that takes you to many of the Revolutionary War-era sites, such as Paul Revere’s house and Bunker Hill. The New England Aquarium, Museum of Science and a stroll along the shops of Newbury Street are also worthwhile.

The Rogers Centre, home to the Toronto Blue Jays, has the luxury of opening the roof during good weather, giving it a homey feel. The best seats are arguably at the Renaissance Toronto Downtown Hotel, where you can watch an entire baseball game from inside your room! Sure, there’s no one selling hot dogs there, but if Junior gets bored, he can run to the hotel’s Kids Room, where free popcorn, movies, games and crafts are offered.

Families will also enjoy walking through the secret passageways of the Medieval-style palace, Casa Loma, taking the elevator to the top of CN Tower, biking along the Harbourfront and checking out the outdoor concerts at the Yo-Yo Ma-designed Toronto Music Garden. Next to the CN Tower is the Ripley’s Aquarium of Canada, which features a 315-foot glass tunnel through the Shark Lagoon.

The official site of the Los Angeles Angels, Angel Stadium in Anaheim, California, is one of the most user-friendly ballparks you’ll ever experience, with easy parking off the highway, a vast selection of food (it was the first stadium to offer sushi!) and mellow fans who won’t spill beer on you after you jump up and high five the family following the Big Papi homer.

The game is just icing on the cake to the great times you can have in SoCal during the summer. Cruise over to Laguna Beach for sun, sand and art. The city’s art festival, Pageant of the Masters, is in full swing come July. Huntington Beach, known for its waves, is a good place to watch surfers or try your luck at the sport. And did we mention nearby Disneyland?