Surely, Harry Potter can infuse some magic into your next trip. Throughout England (particularly London) and Scotland, Harry Potter enthusiasts will feel like they’ve “disapparated” right into scenes from the movies and books — and they’ll be (partially) correct.

Seeing the house used for Number 4 Privet Drive, the woods in which Forbidden Forest scenes were filmed, the place at Oxford that became Hogwarts’ Grand Hall and the many other film sites will thrill movie fans. Meanwhile, book purists can experience the real places described in the books, as well as the locations and buildings that inspired Harry Potter creator J. K. Rowling.

Here are five places for HP fans to get an authentically magical experience: 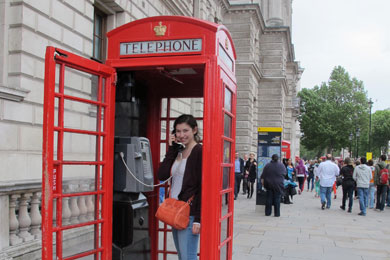 1. London: Where Magical and Muggle Worlds Collide
One way to get kids interested in landmarks such as Big Ben, the London Eye and Trafalgar Square, is to remind them that they’ve already seen and/or read about these sites in “Harry Potter and the Order of the Phoenix” (2007), these sites, as well as the Tower Bridge and Buckingham Palace, are featured as Harry flies to the safety of Number 12 Grimmauld Place. And Grimmauld Place, though not visible to muggles, is thought to lie at Claremont Square, N1, a short walk from King’s Cross station.

King’s Cross Station, the iconic gateway between magical and non-magical worlds for Hogwarts students, now has Platform 9 3/4 clearly marked (tell the kids it’s so muggle-born Hogwarts students won’t be as confused as Harry was on his first day). There is even a luggage cart disappearing into the wall where kids can pose for a fun photo-op. And just outside, the neo-Gothic façade of St. Pancras Station is where the Weasley’s magical Ford Anglia took flight in Harry Potter and the Chamber of Secrets (2002).

Potter film fans can relive the moment they met Harry on the steps of Number 4 Privet Drive in the fictional town of Little Whinging. The doorstep where infant Harry is left for his aunt and uncle was filmed about 10 miles from Heathrow Airport, in front of 12 Picket Post Close in the town of Bracknell. It’s a private home, so you won’t see the inside, but the indoor scenes were shot in a studio anyway.

In the book, Death Eaters tear down Brockdale Bridge, killing several muggles. The films used the Millennium Bridge, but fans can see that the bridge, which fell to tragic music via special effects on the big screen, is still standing today.

While on the bridge, look across the Thames to Houses of Parliament. The phone booth in front of Great Scotland Yard that dropped Harry and Mr. Weasley into the Ministry of Magic for Harry’s hearing in The Order of the Phoenix was a temporary prop, but guide Richard Jones points out that a similar phone booth sits across from the Houses of Parliament — the perfect place to pretend you’re about to enter the Ministry of Magic and snap a photo.

When you’re ready for a break from the city, the London Zoo in Regent’s Park, has a special site for Potter fans. The scene where Harry first learned he could communicate with snakes was filmed here at the Reptile House. A plaque marks the spot where the Burmese python and Harry had their encounter; today the snake case is home to a very poisonous black mamba, so even if he speaks to you, don’t let him out. 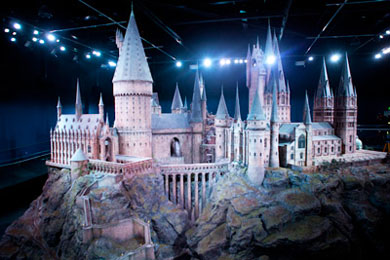 2. The Studio Sets: Movie Magic is Magic, Too
What HP fan could resist the chance to explore the film sets for Diagon Alley, the Great Hall, Dumbledore’s office, Hagrid’s hut and the Gryffindor common room, not to mention the costumes and props?

At the Warner Bros. Studios London — about an hour outside the city — you’ll learn many of the films’ secrets for creating special effects and set building. (Note: Tickets must be bought in advance; they aren’t sold onsite.) For example, did you know that the Chamber of Secrets door is made of eight animatronic snakes and the many books that cover the walls of Dumbledore’s iconic office mostly contain either copies of telephone directories or the Yellow Pages? You’ll also learn what say the actors had in the design of their wands and the actual contents of the potions jars along with many other exclusive, behind-the-scenes facts.

You also may have the chance to learn how to make objects fly across the room and cast your very own patronus. Throughout the year, there are seasonal surprises, such as wand choreography lessons from Wand Combat Choreographer Paul Harris, who composed the battle scene between Dumbledore (Michael Gambon) and Voldemort (Ralph Fiennes) in Harry Potter and the Order of the Phoenix (2007). There are also set design workshops and tours by Hogwarts-dressed staff. 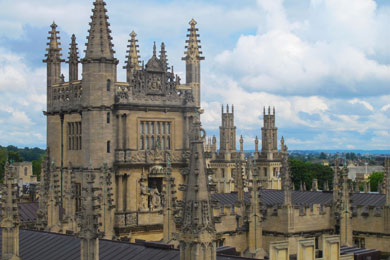 3. Oxford: Hogwarts for Muggles
Perhaps nowhere resembles Hogwarts more than Oxford. From the hospital wing to the dining hall to the steps where Professor McGonagall welcomed the first years, Oxford has been the site of filming, as well as the inspiration for many Hogwarts locations. The best way to connect the sites and movie scenes is to book a walking tour of the town and University through the Oxford Visitor Information Center.

Kids may also enjoy the Hogwarts feeling of sleeping in the dorms’ family rooms and dining in one of the college dining halls. Among the don’t-miss sites are Oxford University’s Great Hall at Christ Church College, which served as Hogwart’s dining hall, and the ornately fan-vaulted Divinity School, which was Hogwarts’ infirmary in the movies.

About an hour and a half drive from Oxford, the 700-year-old Lacock Abbey was the site of many of the classrooms and hallways used in the movies. See the halls where Harry heard the basilisk, McGonangall and Snape taught their lessons and where the golden trio discovered the door to Fluffy. Lacock was also used for Pride and Prejudice, Wolfman and other films. 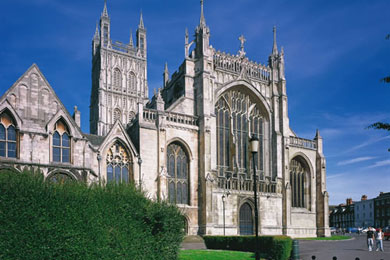 4. Gloucester: J.K. Rowling’s Hometown
The true Potter book fan will be fascinated to see the place that inspired so many of J. K. Rowling’s famously specific descriptions. The writer grew up in Church Cottage, a Tutshill, Gloucestershire county house on Coleford Road, built by Gothic Revivalist architect Henry Woodyer in 1852. The house inspired the imagined Number 4 Privet Drive, although apparently Rowling didn’t realize how much she had borrowed from her childhood home until she saw the interior studio set of Number 4 and realized it was almost exactly the same. The actual house, a private home, can only be viewed from the outside.

The nearby 11th century Gloucester Cathedral also inspired Rowling, and the exterior was used in the Harry Potter films as Hogwarts School of Witchcraft and Wizardary. The halls also appeared in the films. Most notably, the elaborately vaulted cloisters became the corridors leading to Gryffindor Common room, with its portrait of the fat lady, who sang in these very halls. And while you probably won’t find any Hogwarts ghosts, there is an ancient crypt, said to be haunted by monks who prayed at Gloucester over its 1,300 years as a place of worship.

Gloucestershire is also home to the Forest of Dean, which Hermione mentions in the books as a place she remembers from childhood. In fact, the forest encompasses the childhood home of J. K. Rowling (although the Deathly Hallows forest scenes were mostly filmed in Swinley Forest, an hour outside London). 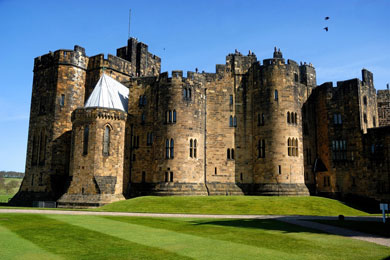 5. Alnwick Castle: Celebrating History Old and New
Every kid fantasizes about being Harry when he went from nervous orphan to sports hero in one catch of the snitch. Children can relive that moment themselves with “broomstick training” in the exact spot in Alnwick Castle where Daniel Radcliffe, aka Harry, was filmed making that amazing catch. Located in Northumberland, less than a two-hour drive south of Edinburgh, the castle was featured as Hogwarts in many scenes of the first two Harry Potter films. In addition to broomstick classes, the castle offers Potter-themed events with appearances by characters and dress-up and crafts activities.

Alnwick Castle’s history dates back to 700 years before Potter stepped onto the scene, and is chockfull of non Potter-related fun. It draws kids in via kid-friendly feudal-times festivals, traditional games and arts projects. The grounds feature marvelous gardens, water sculptures and one of the world’s largest tree houses. Join a costumed interpreter to see both medieval and magical sides of the castle on the Battleaxe to Broomsticks Tour.

About an hour away are the cloisters of Durham Cathedral, which appeared in the films as the quadrangle of Hogwarts. Potter fans will easily spot the place where, in a moment of cinematic splendor, Harry sets Hedwig flying into the snow and, in a less beautiful instance, Ron vomits slugs. A UNESCO World Heritage Site, the 11th century Cathedral is considered one of the finest examples of Norman architecture and an attraction in its own right. While not in the movies, the dorm rooms and dining hall at the nearby 11th century Durham Castle offer budget accommodations that are reminiscent of Hogwarts.

Bonus: From Start to Finish
If you’ve already traveled this far North, go a little further to Edinburgh. There, you can end your journey with a pilgrimage to The Elephant House coffee shop, where a homeless J.K. Rowling began writing her famous series, and the glamorous Balmoral Hotel, where she penned the grand finale.

Tours
You don’t have to discover these places or their history on your own. There are plenty of tours dedicated entirely to seeing England through the lens of the wizarding world. Muggle Tours offers a 2.5-hour walking tour of London; bus and private taxi tours, offered by a number of companies, also take in Oxford and other sites beyond the city. For those who prefer to do it on their own, licensed guide and author Richard Jones offers a free, easy-to-follow, downloadable London tour and treasure hunt that he originally designed for his own children.