The best middle grade (MG) and young adult (YA) books released in March 2019 feature middle school bullies who want to reform, WWII-era love stories, and small-town sci-fi adventures with a distinctly Stranger Things-like vibe. Pick up one or more of these new releases for your kids’ next road trip, plane ride, or family vacation. 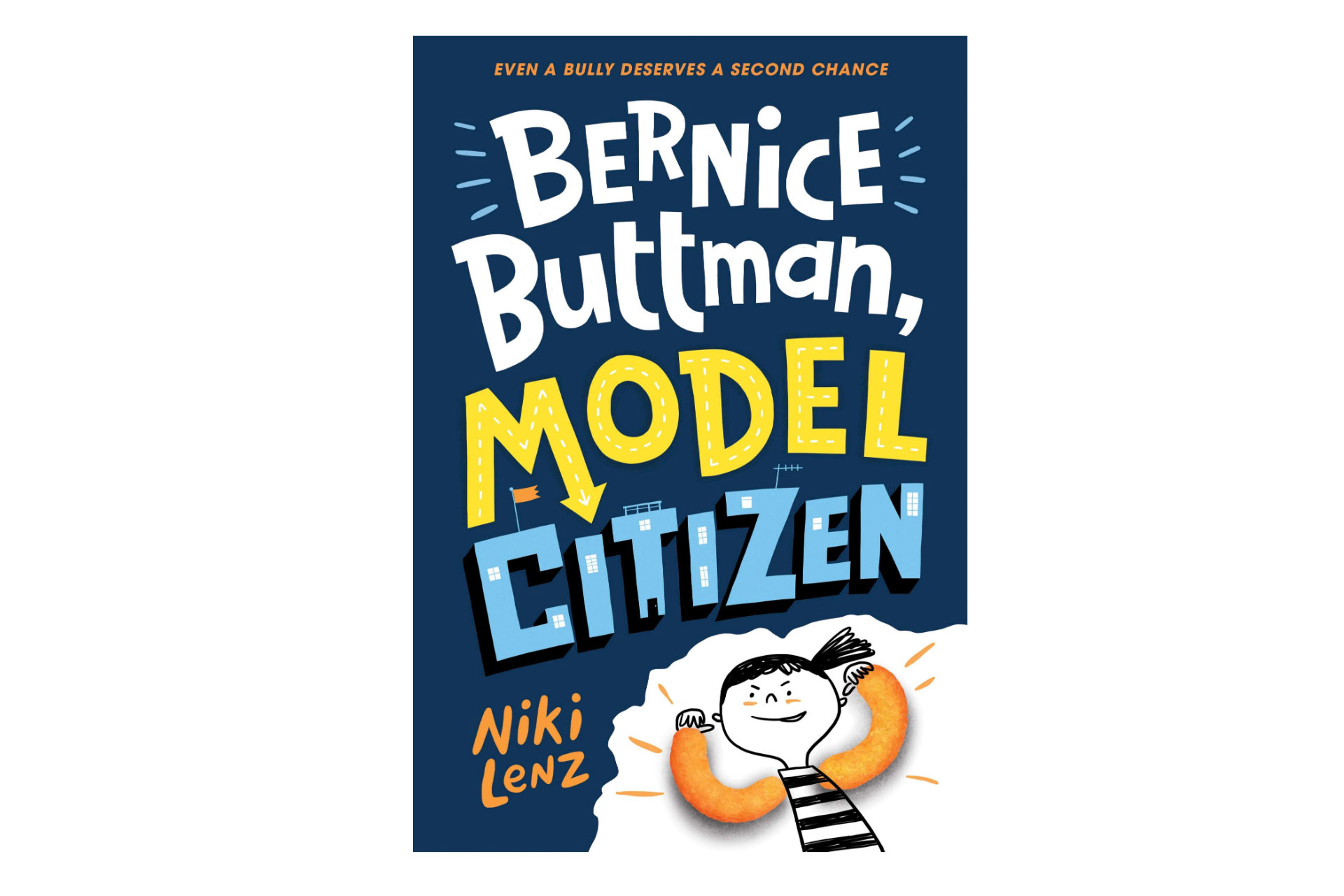 From the publisher:“Bernice Buttman is tough, crass, and hilarious, and she just might teach you a thing or two about empathy in this debut reminiscent of The Great Gilly Hopkins.

When you’re a Buttman, the label “bully” comes with the territory, and Bernice lives up to her name. But life as a bully is lonely, and if there’s one thing Bernice really wants (even more than becoming a Hollywood stuntwoman), it’s a true friend.

After her mom skedaddles and leaves her in a new town with her aunt (who is also a real live nun), Bernice decides to mend her ways and become a model citizen. If her plan works, she just might be able to get herself to Hollywood Hills Stunt Camp! But it’s hard to be kind when no one shows you kindness, so a few cheesy pranks may still be up her sleeve. . . .”

What critics are saying:“Bernice is pragmatic, complex, and compelling, and she has a heart of gold.” —Kirkus 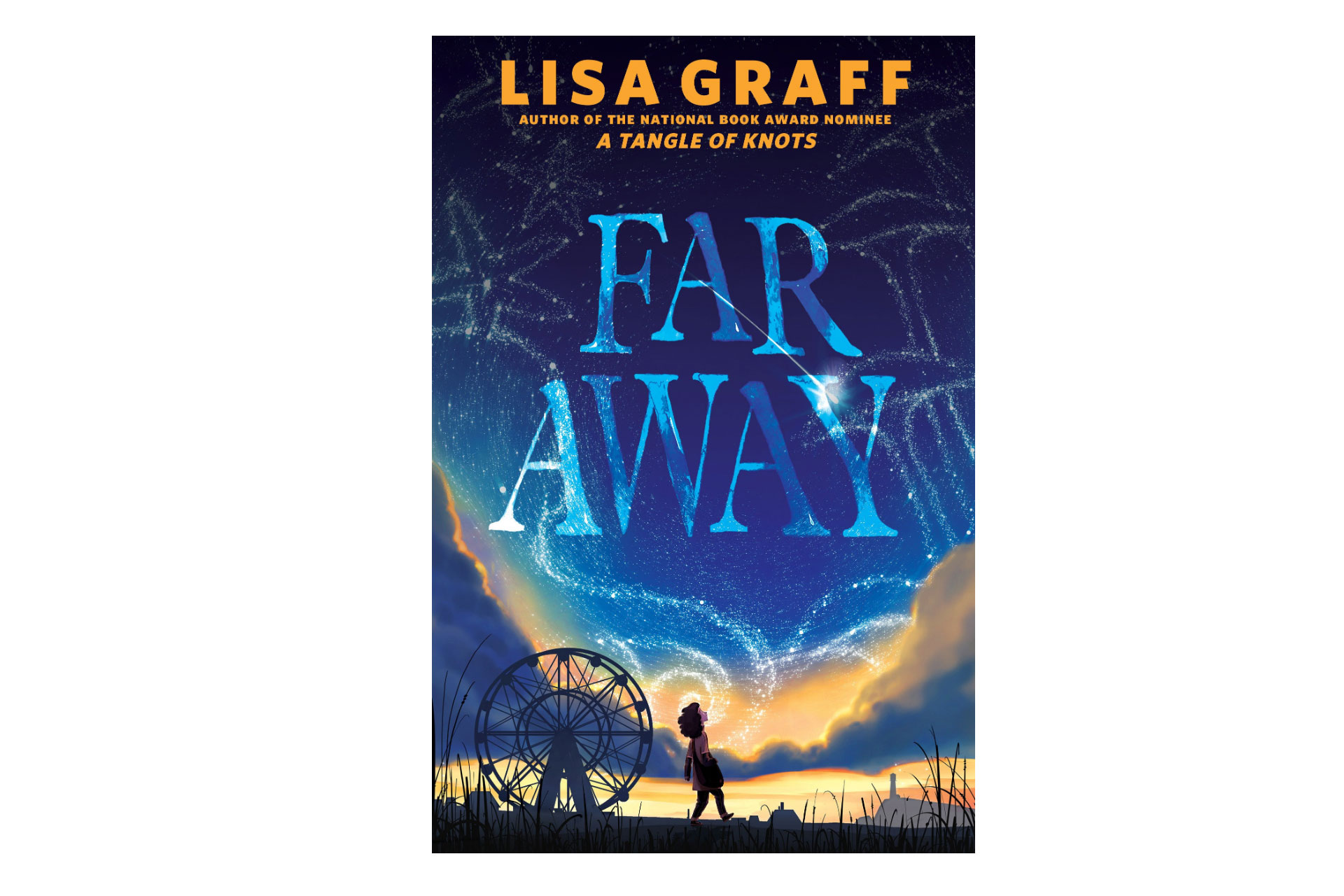 2. Far Away by Lisa Graff

CJ’s Aunt Nic is a psychic medium who tours the country speaking to spirits from Far Away, passing on messages from the dearly departed. And CJ knows firsthand how comforting those messages can be—Aunt Nic’s Gift is the only way CJ can talk to her mom, who died just hours after she was born.

So when CJ learns that she won’t be able to speak to her mother anymore, even with Aunt Nic’s help, she’s determined to find a work-around. She sets off on a road trip with her new friend Jax to locate the one object that she believes will tether her mother’s spirit back to Earth . . . but what she finds along the way challenges every truth she’s ever known. Ultimately, CJ has to sort out the reality from the lies.

National Book Award nominee Lisa Graff has written a poignant, heartfelt novel that explores the lengths we go to protect those we love—and the power secrets have to change our worlds.”

What critics are saying: “Graff nimbly crafts a credible novel from the unlikely, shaping layered characters and unforeseen plot twists while exploring issues of truth and illusion—and the emotion-infused miasma that separates the two. A genuinely moving and memorable story.”  —Publishers Weekly (Starred Review) 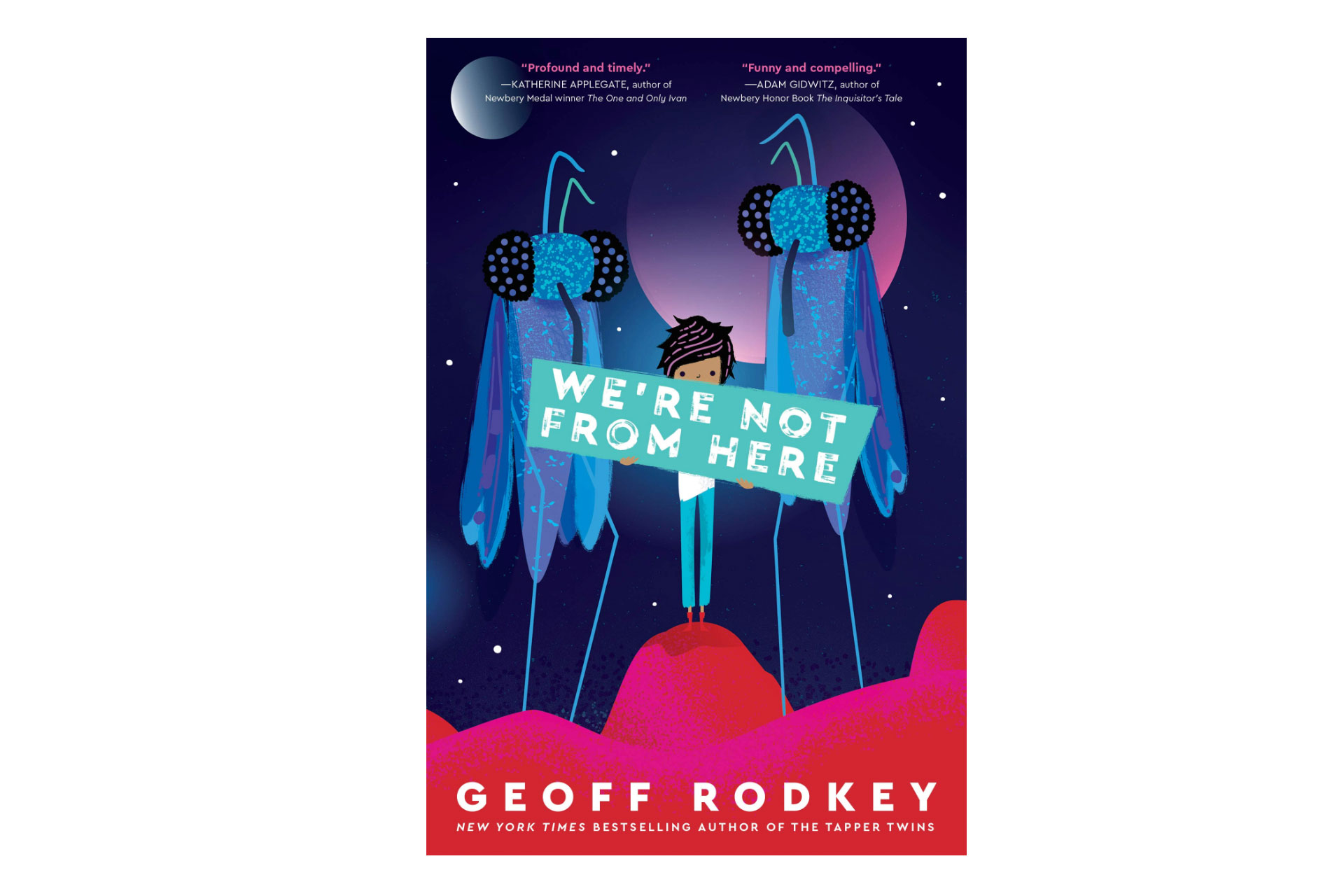 3. We’re Not From Here by Geoff Rodkey

From the publisher: “Imagine being forced to move to a new planet where YOU are the alien! From the creator of the Tapper Twins, New York Times bestselling author Geoff Rodkey delivers a topical, sci-fi middle-grade novel that proves friendship and laughter can transcend even a galaxy of differences.

The first time I heard about Planet Choom, we’d been on Mars for almost a year. But life on the Mars station was grim, and since Earth was no longer an option (we may have blown it up), it was time to find a new home.

That’s how we ended up on Choom with the Zhuri. They’re very smart. They also look like giant mosquitos. But that’s not why it’s so hard to live here. There’s a lot that the Zhuri don’t like: singing (just ask my sister, Ila), comedy (one joke got me sent to the principal’s office), or any kind of emotion. The biggest problem, though? The Zhuri don’t like us. And if humankind is going to survive, it’s up to my family to change their minds. No pressure.”

What critics are saying: “A quirky sci-fi adventure with a surprising layer of political irony.”—Kirkus (starred review) 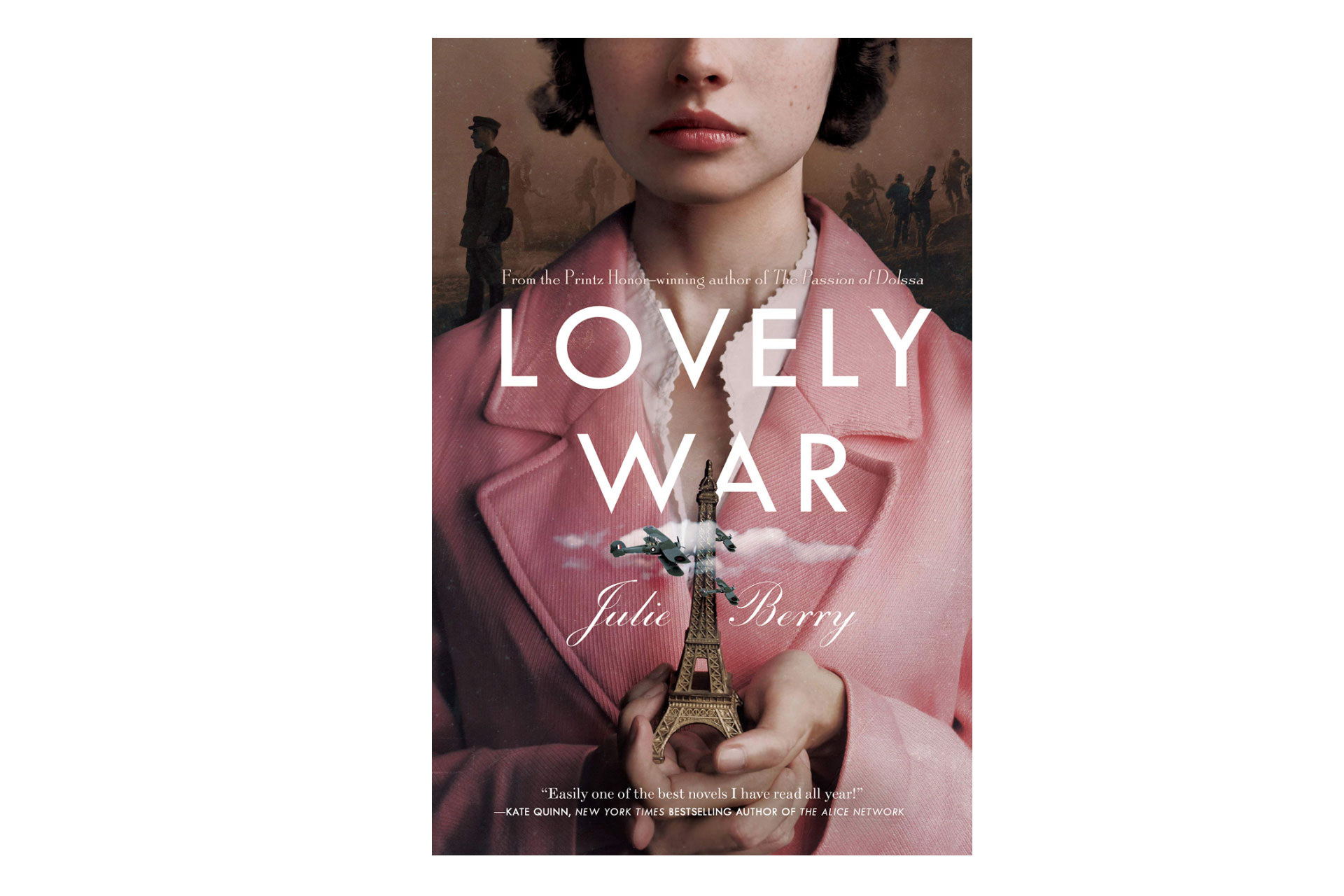 From the publisher: “A sweeping, multi-layered romance set in the perilous days of World Wars I and II, where gods hold the fates—and the hearts—of four mortals in their hands.

They are Hazel, James, Aubrey, and Colette. A classical pianist from London, a British would-be architect-turned-soldier, a Harlem-born ragtime genius in the U.S. Army, and a Belgian orphan with a gorgeous voice and a devastating past. Their story, as told by goddess Aphrodite, who must spin the tale or face judgment on Mount Olympus, is filled with hope and heartbreak, prejudice and passion, and reveals that, though War is a formidable force, it’s no match for the transcendent power of Love.”

What critics are saying: “Berry’s evocative novel . . . gains steam as the stories flesh out. Along the way, it suggests that while war and its devastation cycles through history, the forces of art and love remain steady, eternal, and life-sustaining.” —Publishers Weekly (starred review) 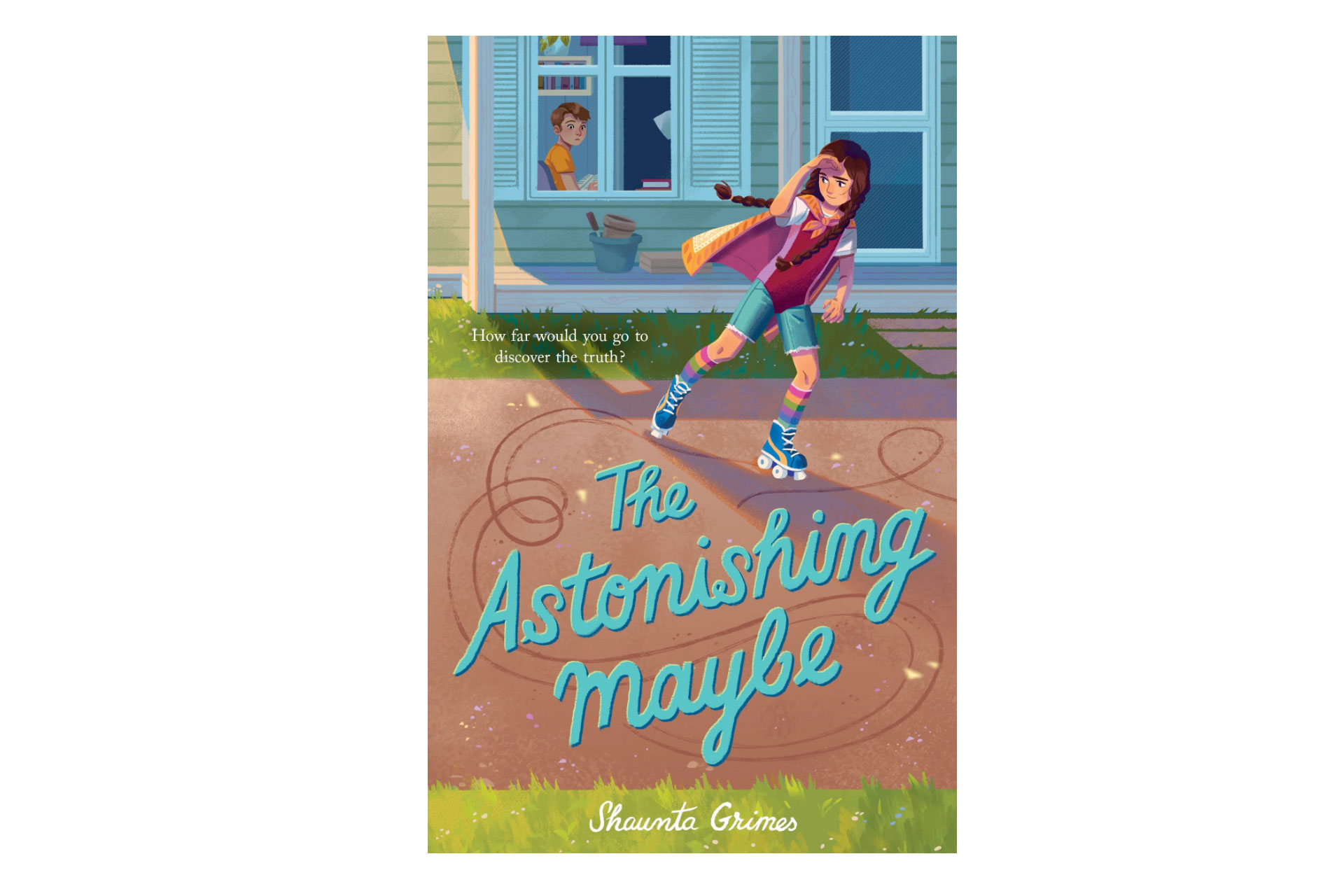 5. The Astonishing Maybe by Shaunta Grimes

From the publisher: “Gideon hates the idea of moving to Nevada from the East Coast. It’s so empty and hot in his new neighborhood. Only one person his age lives nearby: the girl next door, Roona.

Gid notices right away that Roona is . . . different. She wears roller skates and a blanket as a cape when she needs to feel strong. What he doesn’t bargain for, however, is how far outside his comfort zone Roona will take him as she enlists his help in finding her long-gone father. For a kid who’s not allowed to ride his bike more than a few blocks from home, this will be an adventure of a lifetime.”

What critics are saying: “At first, this is a book about friendship with a touch of magical realism. As it progresses, it becomes a deeper meditation about a parent’s clinical depression from a child’s point of view. Well crafted and unique. Recommended.” —School Library Journal 6. A Good Kind of Trouble by Lisa Moore Ramée

From the publisher: “Twelve-year-old Shayla is allergic to trouble. All she wants to do is to follow the rules. (Oh, and she’d also like to make it through seventh grade with her best friendships intact, learn to run track, and have a cute boy see past her giant forehead.)

But in junior high, it’s like all the rules have changed. Now she’s suddenly questioning who her best friends are and some people at school are saying she’s not black enough. Wait, what?

Shay’s sister, Hana, is involved in Black Lives Matter, but Shay doesn’t think that’s for her. After experiencing a powerful protest, though, Shay decides some rules are worth breaking. She starts wearing an armband to school in support of the Black Lives movement. Soon everyone is taking sides. And she is given an ultimatum.

Shay is scared to do the wrong thing (and even more scared to do the right thing), but if she doesn’t face her fear, she’ll be forever tripping over the next hurdle. Now that’s trouble, for real.”

What critics are saying: “Shayla navigates the world of middle school and the troubled world beyond with wit and endless heart. A timely, funny, and unforgettable debut about friendship, facing your fears, and standing up for what’s right.” —Kirkus (starred review) 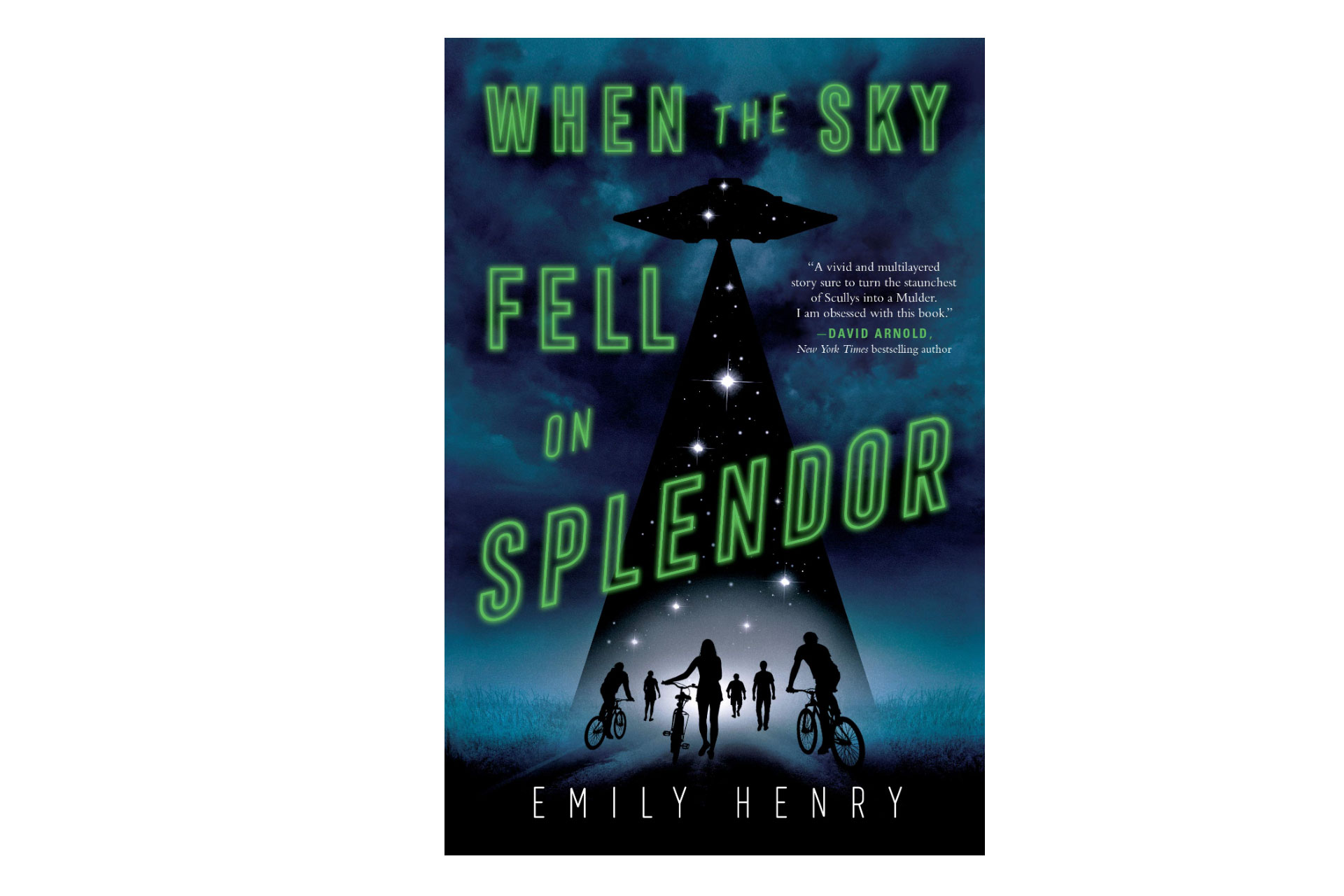 7. When the Sky Fell on Splendor by Emily Henry

From the publisher: “The Serpent King meets Stranger Things in Emily Henry’s gripping novel about a group of friends in a small town who find themselves dealing with unexpected powers after a cosmic event.

Almost everyone in the small town of Splendor, Ohio, was affected when the local steel mill exploded. If you weren’t a casualty of the accident yourself, chances are a loved one was. That’s the case for 17-year-old Franny, who, five years after the explosion, still has to stand by and do nothing as her brother lies in a coma.

In the wake of the tragedy, Franny found solace in a group of friends whose experiences mirrored her own. The group calls themselves The Ordinary, and they spend their free time investigating local ghost stories and legends, filming their exploits for their small following of YouTube fans. It’s silly, it’s fun, and it keeps them from dwelling on the sadness that surrounds them.

Until one evening, when the strange and dangerous thing they film isn’t fiction—it’s a bright light, something massive hurtling toward them from the sky. And when it crashes and the teens go to investigate . . . everything changes.”

What critics are saying: “Fast-paced and intricately plotted, the story rockets toward an unexpected, sublime conclusion. Though resting comfortably in science fiction, it becomes clear in the end that this book is about so much more.” —Booklist 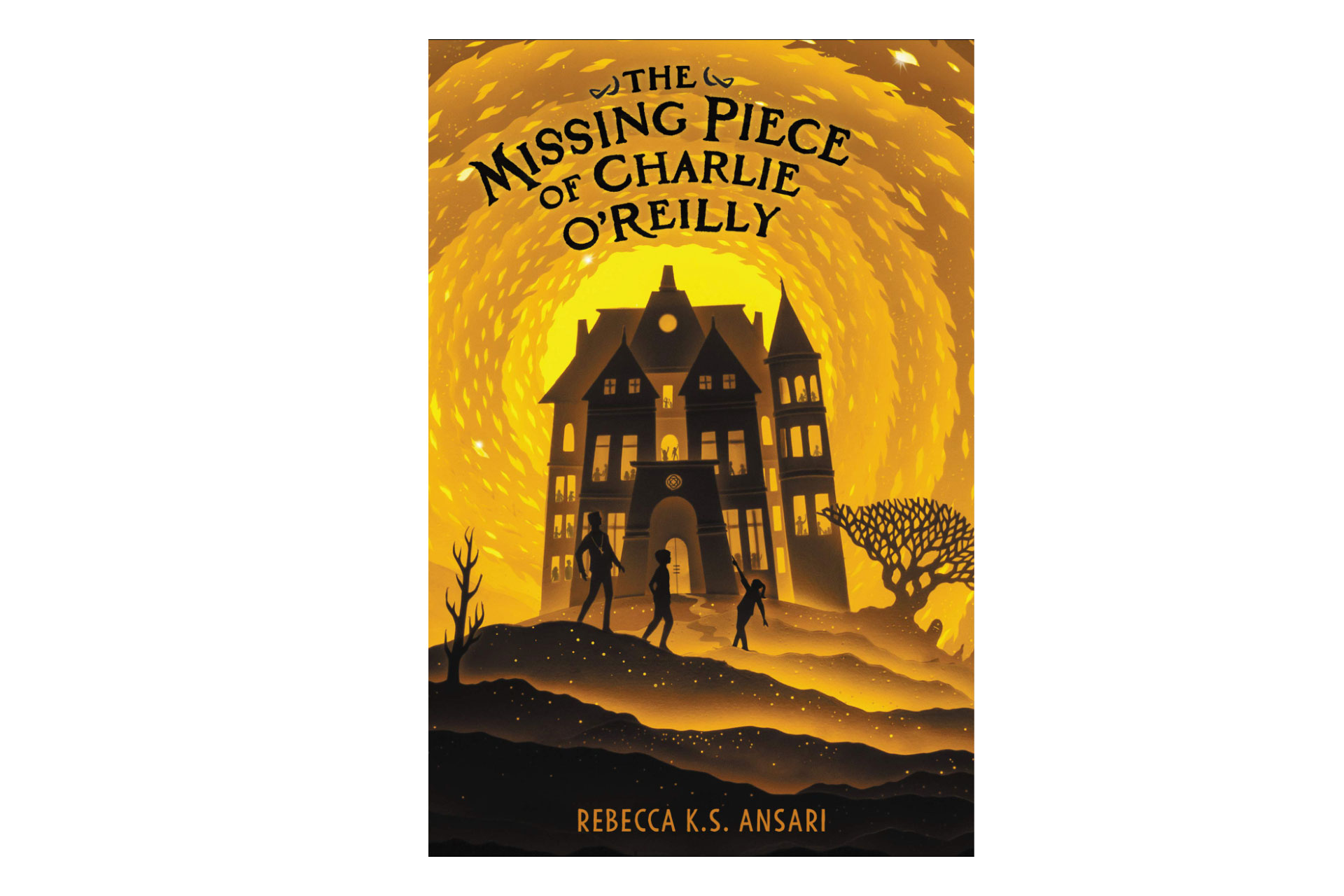 8. The Missing Piece of Charlie O’Reilly by Rebecca K.S. Ansari

From the publisher: “Charlie O’Reilly is an only child. Which is why it makes everyone uncomfortable when he talks about his brother, Liam. His eight-year-old kid brother, who, up until a year ago, slept in the bunk above Charlie, took pride in being as annoying as possible, and was the only person who could make Charlie laugh until it hurt.

Then came the morning when the bunk, and Liam, disappeared forever. No one even remembers him—not Charlie’s mother, who has been lost in her own troubles; and not Charlie’s father, who is gone frequently on business trips. The only person who believes Charlie is his best friend, Ana—even if she has no memory of Liam, she is as determined as Charlie is to figure out what happened to him.

The search seems hopeless—until Charlie receives a mysterious note, written in Liam’s handwriting. The note leads Charlie and Ana to make some profound discoveries about a magic they didn’t know existed, and they soon realize that if they’re going to save Liam, they may need to risk being forgotten themselves, forever.” 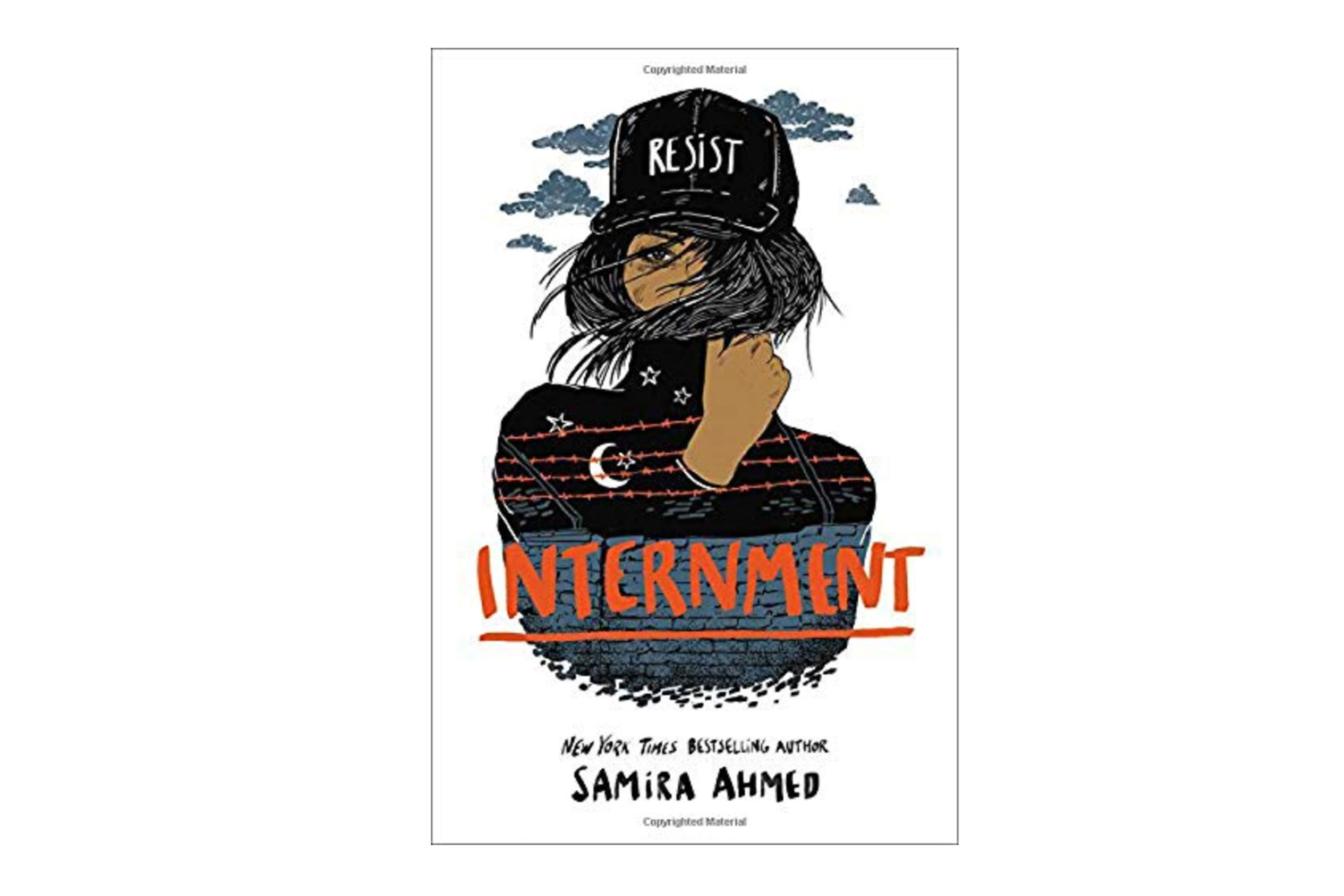 From the publisher: “Set in a horrifying near-future United States, 17-year-old Layla Amin and her parents are forced into an internment camp for Muslim American citizens.

With the help of newly made friends also trapped within the internment camp, her boyfriend on the outside, and an unexpected alliance, Layla begins a journey to fight for freedom, leading a revolution against the internment camp’s Director and his guards.

Heart-racing and emotional, Internment challenges readers to fight complicit silence that exists in our society today.”

What critics are saying: “By the end of the first two pages . . . the reader will be breathless with the anticipation and excitement of what’s to come.” ―School Library Connection(starred review) 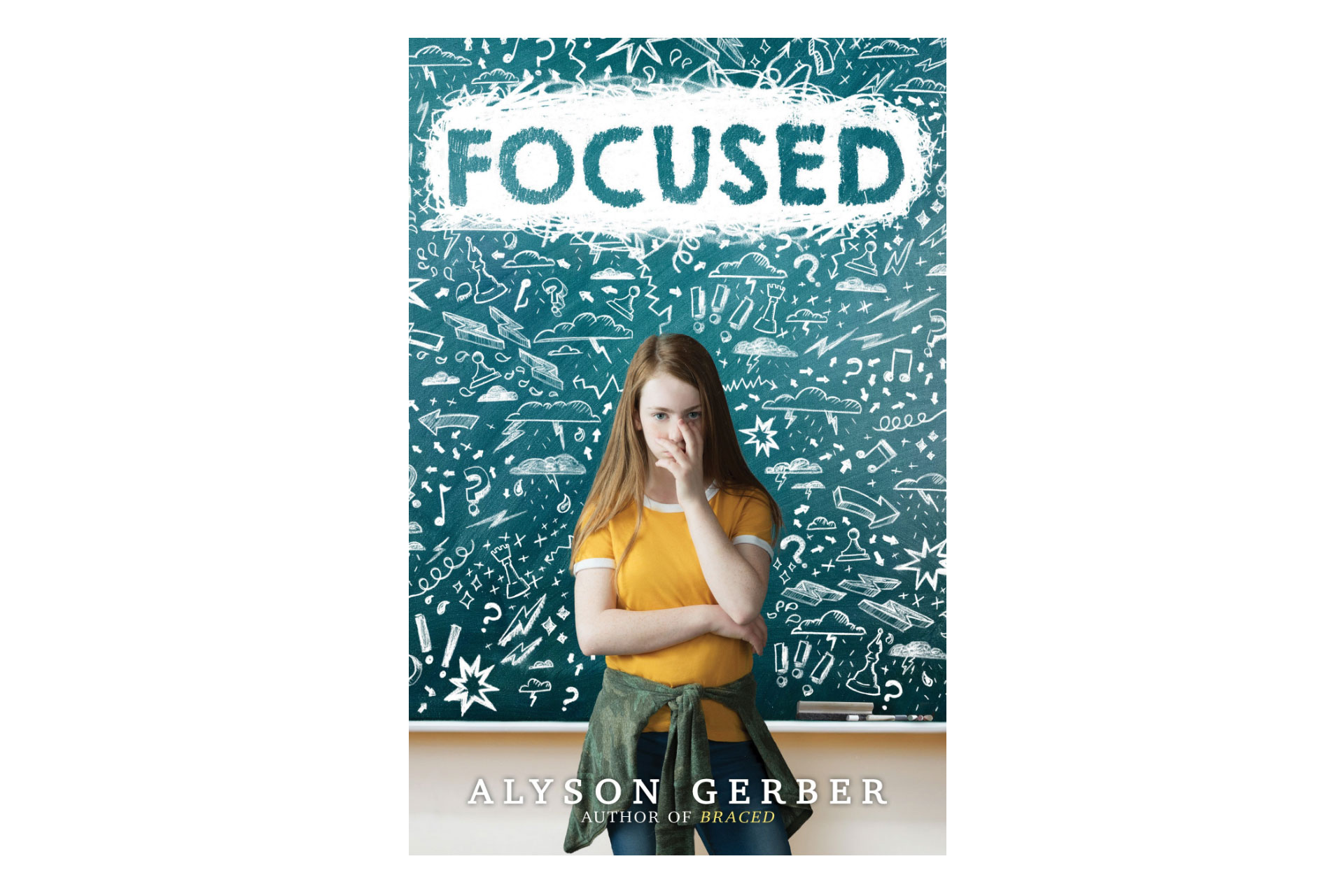 From the publisher: “Clea can’t control her thoughts. She knows she has to do her homework . . . but she gets distracted. She knows she can’t just say whatever thought comes into her head . . . but sometimes she can’t help herself. She know she needs to focus . . . but how can she do that when the people around her are always chewing gum loudly or making other annoying noises?

It’s starting to be a problem—not just in school, but when Clea’s playing chess or just hanging out with her best friend. Other kids are starting to notice. When Clea fails one too many tests, her parents take her to be tested, and she finds out that she has ADHD, which means her attention is all over the place instead of where it needs to be.

Clea knows life can’t continue the way it’s been going. She’s just not sure how you can fix a problem that’s all in your head. But that’s what she’s going to have to do, to find a way to focus.”

What critics are saying: “An accurate and compassionate picture of growing up with ADHD is the icing on the cake of this well-told novel.” —Kirkus (starred review)