Pirates are popular, especially since Disney’s Pirates of the Caribbean movie series came onto the scene. From games and books to Halloween and Hollywood, pirates tantalize us with their free-spirited, thrill-seeking, fun-loving and responsibility-evading ways — not to mention those nifty costumes, tropical islands they’re forever sailing to and the lure of buried treasure. If you and your aspiring pirates wonder where to find pirate lore galore, there are plenty of pirate attractions out there to keep you occupied. Here’s our list of favorite pirate sites for kids and families. 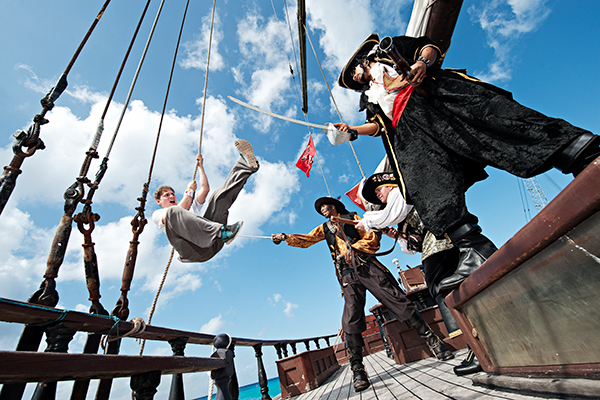 St. Augustine Pirate & Treasure Museum – St. Augustine, Fla.
A real pirates exhibit detailing the lives of nearly 30 historical pirates, the St. Augustine Pirate & Treasure Museum also features one of the world’s biggest collections of pirate artifacts. You’ll learn how Blackbeard was the most feared pirate in history: usually armed with six pistols, a sword and musket, he hid lit matches under his hat, so the resulting cloud of smoke would convince victims they faced the devil himself. You’ll also hear how the King of England knighted Sir Henry Morgan (the man believed to be history’s most murderous pirate), and appointed him the rich and powerful Lieutenant Governor of Jamaica.

Fittingly, the museum is in a city once destroyed by two pirates: Sir Francis Drake, who led 2,000 men in a raid in 1586, and Robert Searle in 1668. Museum founder Pat Croce is the author of The Pirate Handbook, which seeks to dispel popular pirate myths (“walking the plank” is merely a Hollywood myth), as well as children’s books about the bearded, one-eyed marauders. After a visit, you’ll score high in pirate trivia, having learned about pirates’ workmen’s compensation (they were paid for loss of limbs), the pirate code of honor and pirate lingo.

Jean Lafitte National Historic Park and Preserve – New Orleans
In Jean Lafitte National Historical Park and Preserve — the nation’s only national park named after a pirate — films, displays and interactive exhibits explain how in 1815, the famed French pirate helped the Americans defeat the British at the Battle of New Orleans. His headquarters was on Grande Terre, a barrier island near Grand Isle at the southern tip of Louisiana.

Legends swirl around Lafitte; this real pirates exhibit will help you figure out which ones are true. His birthplace is unknown (probably France or Haiti, then a French colony), as are his whereabouts after 1820, when he was forced from Galveston, Texas. Handouts in the park’s six locations, including visitors’ centers in New Orleans’ French Quarter and the swampy Barataria Preserve, try to sort fact from fiction about this man, who is often regarded as a hero in South Louisiana. There are streets, bars, houses and even a town named after him. His pirate crew’s descendants still live throughout the area.

Gasparilla Pirate Festival – Tampa, Fla.
At the annual Gasparilla Pirate Festival, a fully rigged, 100-foot replica of an 18th-century pirate ship sails across Hillsborough Bay, and is joined by thousands of small pleasure boats to form a flotilla. Its costumed pirate captain receives the key to the city from the mayor of Tampa, who “surrenders” after the ship docks at the Convention Center. In a Mardi Gras-style pirate parade, featuring 90 floats and 14 marching bands, crewmembers in themed costumes toss colorful beads, toys and commemorative coins to the cheering crowds who throng Bayshore Boulevard.

A children’s parade, which takes place the weekend before the adult parade, features costumed kids, their families and festively decorated strollers and wagons on a half-mile stretch of the same parade route. The Children’s Gasparilla Extravaganza is Tampa‘s main family event of the year. A spectacular fireworks display set to music, plus a street festival with food vendors and bands on stages, are also part of the pirate festival, which occurs in late January or early February and has been staged in Tampa since 1904.

Pirates of Nassau – Nassau, Bahamas
In the Pirates of Nassau, a wax museum that immerses visitors into the Golden Age of Piracy, where it’s always 1716. You board a replica of a pirate ship at twilight, hearing and smelling the sea water lapping at the quay, and listening to jubilant pirates singing about capturing a Spanish ship. Then, on deck, you meet the fierce pirate Blackbeard and his crew, amid the sound of cannons exploding. In another of the dozen rooms, you’ll watch female pirates Anne Bonney and Mary Read disputing their shares on the beach of Nassau.

Nassau once boasted the biggest concentration of pirates in the New World, from 1690 to 1720, due to a strategic location and shallow waters that are ideal for pirate vessels. Legend says that when pirates dreamed, they did not of Heaven, but of returning to Nassau. Also at this pirate site for families, you’ll find exhibits that explain why piracy eventually faded away (executions and escapes had a lot to do with it) and display cutlasses, pistols and coins like those used by pirates.

Contraband Days – Lake Charles, La.
Where else do pirates force the mayor to walk the plank? In this southwest Louisiana city, pirates rule Contraband Days, a two-week festival each May. It is the state’s longest-running festival (after Mardi Gras). As cannons roar, Jean Lafitte and his crew arrive by boat, “capture” Lake Charles, and, with swords drawn, force the fully clothed mayor to jump into the lake. Contests for children’s pirate costumes, arm wrestling, barbecuing and boat-building are some of the highlights. Families also look forward to carnival rides, bed races and a sailboat regatta.

Food booths sell tasty Cajun specialties like gumbo, jambalaya and crawfish during the festival, which draws over 100,000 people. A stage show features Australian animals like kangaroos and wallabies. Admission costs a small fee per day (free for kids 5 and under), but carnival rides are extra. 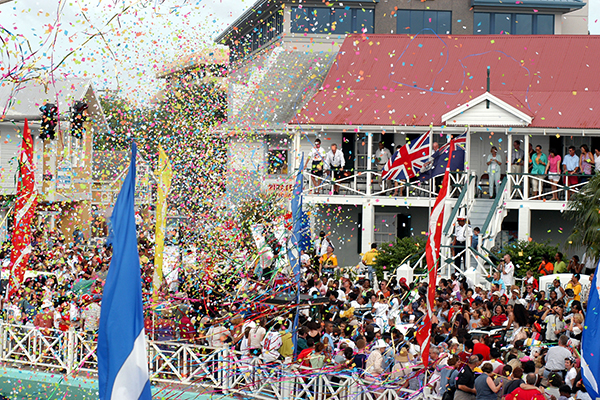 Scenes from Pirates of the Caribbean – Kauai, Hawaii
If you want to see the “Caribbean” scenes where Captain Jack Sparrow seeks the Fountain of Youth, head for Kauai instead, where they were actually filmed. The arch Johnny Depp is standing in front of in movie posters, and in an early scene? It’s Honopu Arch at the isolated and majestic Honopu Beach, famous for its steep knife-edged cliffs and lush emerald-green valleys. Depp and Geoffrey Rush, playing Barbossa, were tied to coconut palms at the now-defunct Coco Palms, once Kauai’s most famous hotel, near the town of Lihue.

The waterfall where Depp leaps is Kilauea Falls, on Kauai’s gorgeous north coast. It is also where the 100-year-old Kilauea Lighthouse offers great views of whales, dolphins and sea birds.
An ideal way to see these film locations (and more from other movies) on Kauai is by taking Robert’s Movie Tour, where a van drives to locations with drop-dead-gorgeous views, and shows movie clips along the way.

Throughout the rest of the year, the Cayman Islands have plenty of other pirate attractions to delight young (and old) swashbucklers. First, set sail on Grand Cayman’s authentic Jolly Roger pirate ship and watch as the crew reenacts swordfights, pirate trials, plank-walking, and ship battles. On Little Cayman, take to the water as you snorkel and scuba dive among wrecked ships in the aqua-blue waters (the Soto Trader vessel wreck is a good place for beginners to start). Then, explore the caverns of Cayman Brac, which Blackbeard and his crew used as a hideout, and search for any treasure he might have left behind!

Teach’s Hole and Miss Hatteras Captain Clam’s Children’s Pirate Cruise – Outer Banks, N.C.
Another Blackbeard hideout was Ocracoke Island, located in the Outer Banks. So it’s only fair that Teach’s Hole displays exhibits and a short film about Blackbeard, pirate flags, women pirates and pirate weapons. After he was killed in 1718 on Ocracoke, he was beheaded and his body was tossed into the sea.

Kids can play pirate for the day on a Miss Hatteras Captain Clam’s Children’s Pirate Cruise, on nearby Hatteras Island. Pirate costumes are supplied, complete with hats, eye patches and play swords, and the boat sails into the sunset, to be “attacked” by another boat using water cannons. After the pirate life palls, Cape Hatteras National Seashore, which stretches to both islands from Bodie Island, delights with 40 miles of peaceful beaches and the 6,000-acre Pea Island National Wildlife Refuge.

Each May, about 100,000 people descend upon Fernandina Beach for the festival. The weekend before the nighttime pirate invasion is filled with daytime invasions, fireworks, and plenty of regional foods, along with a costumed pirate parade. Contests offer prizes for Little Pirates, Pirates in Training and even the person with the best beard! In the Kid’s Fun Zone, children can ride ponies, watch puppet shows, climb a rock wall, play games, and dabble in sand art and other crafts. Adults can play, too — it’s called shopping. You’ll find more than 300 artists and craftspeople selling their wares, plus 75 antiques and collectibles vendors.

Fort Charles – Port Royal, Jamaica
Once called the “wickedest city in Christendom,” this area was a haven for pirates and prostitutes, and overflowed with taverns. Today, this sleepy fishing town, southwest of Kingston, features the remains of Fort Charles, a 17th century fort — the oldest legacy of Jamaica‘s British rule — whose Maritime Museum contains archaeology artifacts salvaged from the sunken pirate city. The fort’s original battlements overlook the underwater city, now a National Heritage site, and the pirate ship Ranger. In St. Peter’s Church, the silver Communion service was supposedly a gift from pirate Henry Morgan.

To reach Port Royal, take a twice-daily ferry or drive the Palisadoes Road from Kingston. Palisadoes Cemetery has the grave of Morgan, who used to attack ships he spied from a high point near Port Maria. Further inland from Port Royal is Spanish Town, where pirate John “Calico Jack” Rackham and women pirates Bonny and Read were convicted on the main square in a now-demolished courthouse. After their 1720 capture in Bloody Bay, off Negril, the resort town on the west coast, “Calico Jack” was hanged east of Port Royal at Gallows Point. Both women — who were pregnant — were imprisoned in the Spanish Town jail, whose ruins lie behind the Old Courthouse.

The Jolly Roger – Barbados
Formerly a sugar plantation owner and a major in the British Army, Stede Bonnet traded life in the Barbados planter elite, as well as a wife and children, for crime on the high seas. Known as the “gentleman pirate,” he was an unlikely figure. Well-educated, book-loving, clean-shaven, and generally clad in a satin vest, lace cuffs and powdered wig, he bought a ship, named it “Revenge,” and paid 70 men to be his crew (instead of stealing a ship, like a self-respecting pirate).

After plundering ships on the Carolina and Virginia coasts, he teamed up with Blackbeard for some time — a collaboration that ultimately ended in betrayal when Blackbeard tricked Bonnet and absconded on his fastest ship, seizing all their loot and most of Bonnet’s men. Bonnet later resumed piracy as a solo act, but was captured after a bloody battle in the Cape Fear Inlet, and was hanged in Charleston in 1718. His spree as a pirate lasted a little over one year.

Today, you can hear about pirate history, walk the plank and jump off a rope swing during a lunch cruise on The Jolly Roger 1, a modern-day “pirate ship” leaving daily from Bridgetown; the trip which also features a swim off Barbados‘ gleaming west coast. Carlisle Bay, where many shipwrecks lie off the west coast, is a great dive site to view tropical fish, eels and seahorses.