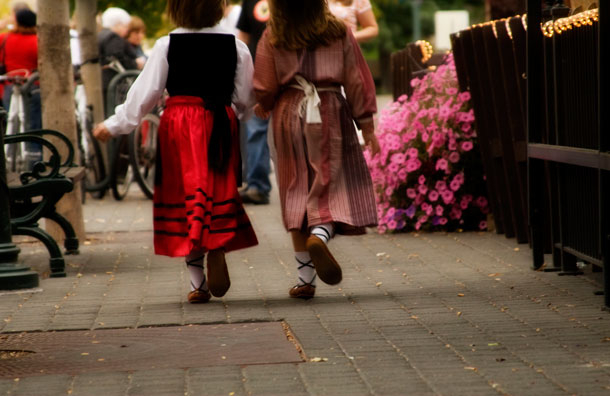 International travel is a major financial and logistical undertaking, especially with children. But there”s significant value in exposing your kids to different cultures, letting them hear foreign languages, try new foods and see art and architecture they won”t find at home. If a trip across an ocean or continent is not feasible, there are many family-friendly destinations in North America and the Caribbean that provide international flavor. You”ll find vibrant neighborhoods with globally influenced architecture and cultural events, the sounds of other languages in the air, and concentrations of ethnic restaurants in the following unique destinations. In Helen, Ga., about 90 minutes north of Atlanta, you"ll find the Bavarian way of life celebrated in restaurants, shops and special events. In 1968, a group of entrepreneurs worked with a local artist who had been stationed in Germany to reinvigorate the town with Bavarian-inspired renovations. The destination now has 1,200 hotel rooms, more than 150 shops and 40 restaurants, and a number of wineries. Try German delicacies at Hofer's or the Old Bavaria Inn Restaurant, and visit during Oktoberfest, held October through November.
2/17 Just over two hours from Seattle, Leavenworth is a small town in Chelan County, Wash., where you"ll also find big Bavarian influences. Shops, hotels, and restaurants -- even popular fast food joints -- look like they belong on the streets of Germany. There are several cultural events each year, the most popular being Oktoberfest and the Christmas Lighting Festival. In the summer, it"s a popular destination for hiking, fishing and camping. The winter brings tubing and Nordic skiing enthusiasts. For a taste of Cuban culture on opposite coasts of Florida, visit Ybor City in Tampa and Little Havana in Miami. Ybor City is a Ã¢â‚¬Å“Latin QuarterÃ¢â‚¬Â founded by Cuban immigrants in 1886, who brought their cigar-rolling industry with them. Start your explorations at the Visitor's Center and the Ybor City Museum. The Ã¢â‚¬Å“casitaÃ¢â‚¬Â gives kids a look at life in the early 1900"s, and the street car barn is worth a look. A flamenco show at the famous Columbia Restaurant is a must. The children"s menu includes the traditional Cuban sandwich. In Miami, Little Havana"s colorful murals and monuments commemorate Cuba. Visit Maximo Gomez Domino Park to watch a game, Los PinareÃƒÂ±os Fruteria open-air market, or the Tower Theater. Stop at a bakery for a guava pastry for the kids, and a thick, sweet Cuban coffee for you. Or, stop at Azucar ice cream company for a scoop of passion fruit or dulce de leche. Participate in Viernes Culturales (Cultural Fridays) art, music and cultural events, and join the one million people who celebrate during the annual Calle Ocho street festival. French history and Gallic culture are prevalent in the state of Louisiana, particularly in New Orleans and the region known as Ã¢â‚¬Å“Cajun Country.Ã¢â‚¬Â The French Quarter is the center of the Big Easy and includes sites such as Le Pavillon Hotel, Degas House and the Joan of Arc statue. You"ll hear a unique Cajun French dialect in the towns, which make up Cajun Country, one of the most culturally diverse regions in the United States. French settlers moved here from Canada"s Acadian region in the mid-1700"s, and have preserved much of their culture while blending with European, African, South American, and Asian immigrants. To learn about Acadian history, head to Lafayette Parish, and visit LARC"s Acadian Village, the Jean Lafitte National Historical Park and Preserve Acadian Cultural Center, and the Acadian Memorial & Museum. Known as Ã¢â‚¬Å“America"s Little Switzerland,Ã¢â‚¬Â this town is an original Swiss settlement dating back to the 1840's, with a replica Swiss Historic Village representing the history and dairy heritage of Green County. Street signs are posted in Swiss-German and many businesses and homes reflect Swiss chalet architecture. Restaurants offer authentic Swiss cuisine, including cheese fondue. At Puempel's Olde Tavern, you may even find a group of old timers playing "jass," a Swiss card game, and speaking in Swiss German. Swiss heritage is celebrated at the annual Wilhelm Tell festival, Swiss Independence Day and the Heidi Festival in June.
7/17 You"ll find dynamic French culture in the two largest cities within the Canadian province of Quebec: Montreal and Quebec. Multicultural MontrÃƒÂ©al is the second largest French city after Paris. You"ll find all street signs, menus, and even announcements on the Metro, in both French and English. Old MontrÃƒÂ©al is the historic part of town, with beautiful colonial French architecture facing the riverfront. Within the Ã¢â‚¬Å“Old Port,Ã¢â‚¬Â you"ll find a lot to see, including the Science Centre, bike tours and river cruises. In the interactive Ã¢â‚¬Å“Game ZoneÃ¢â‚¬Â at Pointe-ÃƒÂ -CalliÃƒÂ¨re, the MontrÃƒÂ©al Museum of Archaeology and History, children can re-enact moments in the city"s history, such as when the Governor of New France signed the treaty marking the Great Peace of MontrÃƒÂ©al. The stone walls, which protected Quebec City, the first permanent French settlement in North America, are still intact, separating its upper and lower towns. There"s a distinctive European feel to the winding streets lined with historic buildings, shops and restaurants. Stroll through Old QuÃƒÂ©bec, and you'll find the open-air entertainment of a European town, such as street entertainers, singers, artists, and horse-drawn carriages. Kids can learn more about the city"s history through the sound and light show at the MusÃƒÂ©e du Fort, or by taking the Ã¢â‚¬Å“Journey into the ColonyÃ¢â‚¬Â interactive tour for children ages 8-14 at the MusÃƒÂ©e de l'AmÃƒÂ©rique francophone. There is more Gaelic spoken on Cape Breton Island, Nova Scotia than any place else in the world. The region is home to the only Gaelic college in North America, but you can also learn about the traditions of the Scottish Highlands by visiting the An Clachan GÃƒÂ idhealach, or the Highland Village, a living history museum, or the Celtic Music Interpretive Center. The rugged landscape and scenic beauty of this island make it perfect for hiking, cycling and sailing.
10/17 This city on Vancouver Island, off the western coast of British Columbia, is referred to by the locals as "a bit of Old England," with a hint of a British accent. Must-see attractions include Butchart Gardens, reminiscent of England"s public gardens; the Edwardian Hatley estate and park; and Craigdarroch Castle. Don"t forget to have high tea at Victoria's Fairmont Empress Hotel, a tradition since 1908.
11/17 This is a French territory of Canada, an archipelago of rocky islands 15 miles off the coast of Newfoundland. Much of the mother country"s culture has been retained here, including the architecture -- quintessential French narrow streets, colorful houses and open-fronted cafes. The local currency is the Euro. Use it to buy fresh baguettes and croissants from eateries, such as Les Delices de Josephine on Rue General Leclerc.
12/17 Even though flags from seven different countries have flown over the U.S. Virgin Islands, the lingering imprint is Danish. The streets of St. Croix still carry Danish names, and both towns on the island -- Oranjanstead and Frederiksted (this is correct and is on St. Croix) -- are prevalent with Danish architecture. Sites where Danish history can be explored include the Estate Whim Museum and Forts Christiansvaern and Frederik in St. Croix, as well as the Annaberg Sugar Plantation in St. John. Because of the connection, dedicated charter flights bring in native speakers from the Netherlands every week. The U.S. territory of Puerto Rico holds its Spanish culture and history close, allowing visitors to experience it through the prevalent language, local cuisine, and historic sites. Nowhere is this more evident than in Old San Juan, a colonial town with cobblestone streets and 18th-century architecture. Other highlights of Spanish influence include the 1532 San JosÃƒÂ© Church, the Museo de Arte de Ponce and the Teatro Tapia. Boise is home to the largest concentration of Basque Americans, some 15,000 descendants from the country bordering Spain and France. The tight community, which emerged in the late 1800"s, even has its own language, Euskara. Visitors can experience this unique culture along the Ã¢â‚¬Å“Basque Block,Ã¢â‚¬Â which includes the Basque Museum, the Basque Pub and Eatery and the Basque Cultural Center. In July, the San Inazio Festival, the feast day of Saint Ignatius of Loyola, is celebrated with music, dance, sports, and other special events.
15/17 San Francisco"s Chinatown is the largest outside of Asia and the oldest in North America. The first Chinese immigrants arrived in this California city in 1848, settling into a neighborhood that would eventually cover 24 square blocks. While your visit will ultimately revolve around a great meal, consider spending time at one of the Saturday markets on Stockton Street, touring the Golden Gate Fortune Cookie Factory, or visiting the Chinese Historical Society of America Museum. In Danish, Solvang means Ã¢â‚¬Å“sunny fields,Ã¢â‚¬Â so this California town, which averages 340 days of sunshine per year, was aptly named by Danish immigrants in 1911. Walking around the seven flower-lined village blocks, you"ll find thatched roofs, windmills and a musical clock tower, and statues of Hans Christian Andersen and the Little Mermaid. You can learn about Danish culture at the Elverhoj Museum of History & Art and the Hans Christian Andersen Museum. There are five bakeries serving aebleskiver pancake balls.
17/17 Did you know Tarpon Springs is home to the largest percentage of Greek Americans anywhere in the United States? The first Greek immigrants arrived during the 1880"s, when they were hired to work as divers in the growing sponge harvesting industry. The small community of Greek divers developed into a day trip destination with distinct Hellenic flavor. In the center of this quaint Gulf Coast town, the sponge docks look like a traditional Greek fishing village. Local shops offer sponges, as well as Greek fashions, home goods, imported foods and other merchandise. You can choose from more than 25 authentic Greek restaurants and cafes for a bite of moussaka or baklava.