All towns have their own mysteries, but if you’re a fan of Netflix’s “Stranger Things,” you know there’s something a bit different about the fictional town of Hawkins, Indiana. The setting of the Emmy award-winning runaway hit has been recreated at Universal Studios’ Halloween Horror Nights for 2018, and you can walk scene-by-scene through Season 1 of the cult show — all while trying to evade the Demogorgon. We recently visited the new exhibit, and lived to tell the tale. Here’s what to expect: Klaxons blared as we entered Hawkins National Laboratory, and right from the beginning, we knew the Demogorgon was on the loose in the darkness. 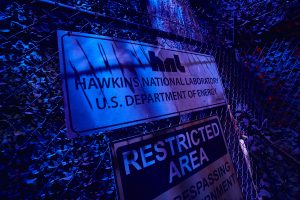 Cleverly, after the opening room where a scientist mysteriously disappeared up the elevator shaft, themed music kicked on and the opening credits rolled overhead on the big screen. We were now all extras on “Stranger Things.” We pushed onward and deeper into the Mirkwood, past Castle Byers, where Will and Dustin lookalikes startled us as they jumped from the darkness. 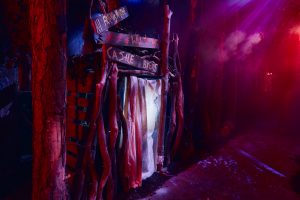 Next, we arrived at the Byers home, where the living room was strung with crazy, flashing Christmas lights around an alphabet walk signaling “R… U… N…” as Joyce frantically hacked at a hole in the wall. Steve narrowly missed us with the swing of his baseball bat in the kitchen; we then mustered up the courage to head down the hallway towards Will’s bedroom. 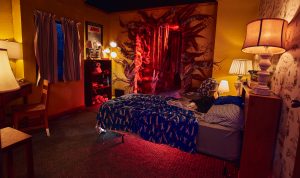 At every turn, the Demogorgon stalked us and jumped shrieking from cracks and corners. At one point, I turned behind to make sure my daughter was OK, and when I faced front, the Demogorgon was a hair’s width from my head. Back into Hawkins Lab, Chief Hopper directed us through the portal into the Upside Down, where strange snow-like flakes drifted through the air. 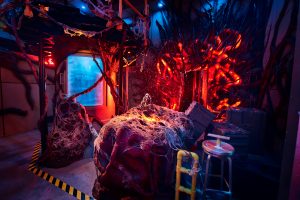 The “Stranger Things” house culminated at Hawkins Middle School, where the Demogorgon ran amuck through the halls. Eleven trapped the Demogorgon against a chalkboard while, at the same time, she protected us from government agents.  And, just like that… we were through. 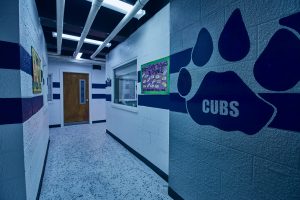 Before You Go: What to Know

Halloween Horror Nights is an intense event and not recommended for children under the age of 13. It is loud, it is chaotic, and you will get scared. However, none of the actors will ever touch you (that is not allowed), nor should you ever contact them.

The “Stranger Things” house is quite popular, and had 90-minute to two-hour wait times to enter the house when we visited. Once inside, the entire experience only lasts about 5 minutes, depending on how fast you walk. You could definitely go through multiple times and catch different details each time. Your best bet? Splurge for the Halloween Horror Nights Express Pass (instead of $79.99), which gets you into the express line for each house/exhibit (including “Stranger Things”).

In addition to the “Stranger Things” house, families can indulge in specialty food items to compliment the evening.  A Benny’s Burgers stand is set up in memory of the Season 1 diner from the show and serves a chicken and waffle sandwich made with Eggo waffles. You can also find Eleven’s Waffle Extravaganza with Reese’s Pieces, jelly beans, chocolate chips and whipped cream stacked between three Kellogg’s Eggo waffles. If you’re looking for a break from the variety of Eggo waffle-themed treats, guests can also find Christmas Tree Light Cupcakes reminiscent of the iconic “Stranger Things” living room scene, in which Joyce tries to communicate with Will. 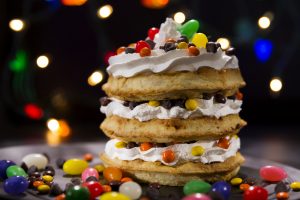